This is well known among Chinese historian. We call it a 'metastable cycle' -- referring to the peak as metastable. It had been brought to the mass in the late 1980s by the famous TV documentary "River Elegy" before the tragedy in 1989. It is nicely presented in English below. 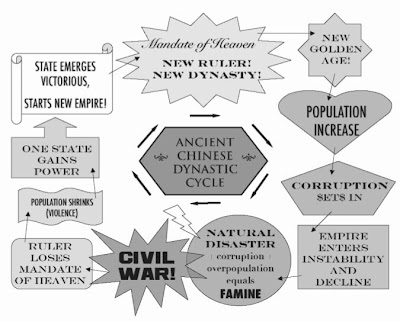 Why such cycle does not occur in other part of the world? I suspect there are a few reasons
There had actually been some efforts to re-create the Roman Empire in Europe. e.g., the Holy Roman Empire which has been famously ridiculed as neither Holy nor Roman nor Empire -- because Europe lacked ingredients 2 and 3 above.
The Cycle helped China to remain as the 'largest country' in the world for most of the past 2 millenia while also prevented China from any revolutionary ideas in thinking (scientific/technological, cultural, political/social) like what happened in Europe during the Renaissance. A unified country means relative long period of peace for development, the flip-side is that the absolute authority such as Confuciusm prevents diversity and competition like China enjoyed during the Warring States Era.
Posted by Sun Bin at 10/29/2008 12:09:00 PM

--Why such cycle does not occur in other part of the world? I suspect there are a few reasons...--

sorry for direct words, but you are a china-concerned idiot who does not know about the worldhistory...

no need to be sorry -- if you can cite real examples...