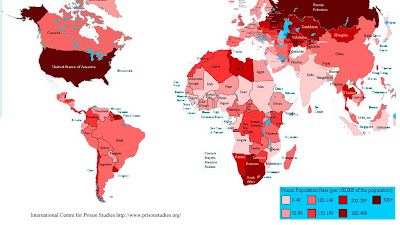 It is quite surprising that the US and Russia are the top 2 countries of imprisonment. I mean, on a per population basis, it is really quite a coincidence that these 2 cold war archrivals would top this list. St Kitts and Nevia scored 3rd and US Virign Islands is #4. Top 10 list here

Bottom 10 have prison rate below 30, but including some anarchic countries such as Nepal and Liberia. Liechtenstein is the only developed country in the bottom 10. (plus Faeroe Is of Denmark).

India scored very well (as a relatively normal country), 15th from the bottom and only 32 prisoners for a relatively peaceful country.

Nationmaster has a list and map which shows similar ranking using stats from 2003.

Abortion rate is a "fake" correlation, since the slope is zero and the graph was skewed by a few (probably questionable) data of Russia/India. In fact any correlation to a non intensive measure (population is 'extensive' while per capita is 'intensive') is likely to be fake. (such as the number of Tanks, but number of tank divided by GDP or by population or by area is intensive measure and hence usually more meaningful)

I can understand why the prisoner rates are correlated with lack of healthcare funding (this is true for US as well), and lack of spending on secondary education or size of house (this is not so for US).

I suspect the correlation with number of Tanks is skewed by the 2 "super powers". But I was surprised to see that Poland, Germany, Vietnam and India all fall on the correlation line. (Russia actually had much less prisoners for its share of tanks, so is China and Egypt. While Mongolia had a lot of prisoners but very few tanks). -- as said above, this is a 'fake' correlation.

Next I am looking for a similar map for death penalty. I think there will also be some surprises.

The only time I've seen someone making a link between abortion rates and imprisonment rates is the first chapter of Freakonomics...

A principal reason for the US holding the dubious honor of having the world's largest per capita prison population is its draconian drug and three strikes laws. In other Western countries with a thriving illicit drug trade, drug users are usually put in rehab not prison. Judges also have more discretion in sentencing and are not forced to condemn a three-time convicted shoplifter to a lifetime in prison.

Prison should be restricted to violent offenders only with non-violent criminals such as unarmed thieves sentenced to jail and restitution.

Prisons are a big and lucrative business. Many states and localities contract out services such as meals and security to private companies, who will surely resist any meaningful reforms. However, I am hopeful that our first black president in a country where 8% of all black men are currently behind bars will make judicial reform a top priority and appoint judges with common sense.