A picture in Beijing 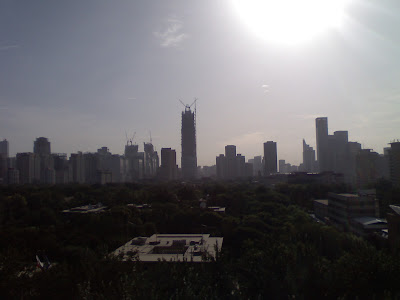 This is a picture from my hotel room in Beijing. The two building in construction next to the tallest one in construction is the (in)famous CCTV Tower. A closer view of which can be seen below (taken at the SE corner of 3rd ring, just outside China World Hotel). 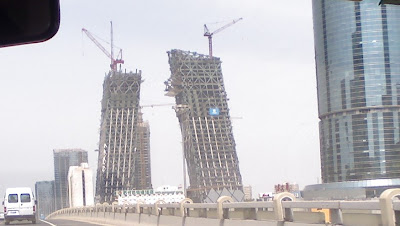 The sky is clear, because it has been raining the previous day.

The green area is the embassy zone in Chaoyang District. The only reason the trees were preserved is because the land belongs to foreign governments. All these friends who recognized China during the early years were rewarded financially (on paper) with the land appreciation. A particular example is the enormous lot comprises of two buildings right in front of the picture. It belongs to one of the former socialist brother countries. Later, after democratization. The two reached a deal for a friendly parting. The big brother was happy to get rid of the poorer pal, while the younger one wanted independence. So a part of the land was split and a new building was built. The enormous lot was split into two, the smaller building to the left of the picture becomes the embassy of the "new" country.

Quiz: (leave answer in the comment field please)
1) which two countries are these?
2) I pass by the German emabassy a few times, I am wondering what happened to the former Democratic Republic of Germany emabssy now. It should have been much larger than the size of the FRG embassy.
Posted by Sun Bin at 8/28/2007 11:47:00 PM

Both Beijing and Shanghai have more green downtown than Hong Kong or Teipei. When these socialist countries recognized PRC, the diplomatic ditrict was still suburban, so they could occupy as much land as they would. When it came to 1970s, Chaoyang has been heavily urbanized. Besides, some old powers just resumed their old compounds during the Northern Government era.

of course you are right :)

I have seen some (good?!?) environmental urban projects planned for 2008. Some of them was the Olimpiad Swimming pool, another was a building designed for water-reuse for sanitary purposes in a residencial-block size. I think not all new projects in China are bad. I hope soo. But the big problem is air pollution.

Greetings from Portugal, a blogger looking for info about Sun Bin, a disciple of Sun Tzu.