Recognizing the professionalism, and hearts of the Japanese

This map shows how professional the Japanese media is. I was trying to locate 2 photos from Saturday's Ming Pao Daily on Japanese donation to the Wenchuan quake. I thought they are quite touching. One of them is a parliament member stopping a driver for donation, the other is a kind hearted lady (probably a housewife) holding a placard on the street asking for donation for China (she seems to feel terribly sad for the victim after watching the news).

What I found was the best map ever in any newspaper/website for the quake. from mainichi 每日新闻. showing the first quake, then the aftershocks of 6+ (red), 5-6 (green) and 4-5, with city names correctly labeled as well. 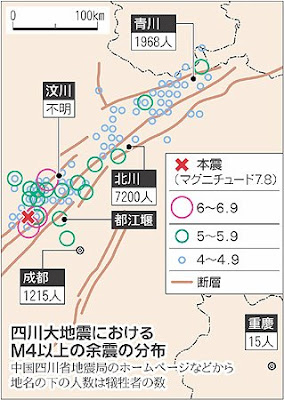 If China is ever to reach Japan in its accomplishment, economic or technological or whatever. It needs to learn from the Japanese professionalism. Many, if not most, Japanese do not see doing a job well as satisfying his boss or making more money. They just feel that they need to do things at their best. They do it for their own satisfaction and joy.

Secondly, as many Chinese have already seen in the famous picture of Japanese rescue team bowing to the victims they unearthed, they should also recognize that many Japanese people are friendly and sympathetic to Chinese people. I will simply show one small data point, a partial donation list one web site: yahoo.co.jp, which gave a link in its front page for donation to China's quake.

The point here is not the total (it is only number from one website), but the relative sizes. As you can see, the total amount, number of people and the amount per person for China's quake is much higher than that for Myanmar (which has more casualty). The reason, of course, has more to do with the news blockade and the misersable response of the Myanmar Junta (and the great recent improvement by the Chinese government). Nevertheless, it helps to illustrate that the Japanese people overall are perhaps more sympathetic to Chinese people than other people from smaller (less known) countries, or at least, they are our friends, not our enemy.

Let's hope that this quake will offer an opportunity for the two great people of Asia to understand each other better, and work to ensure peace in this area of the world.

Indeed. I've had an opportunity to visit Tokyo last year and was (and am) absolutely impressed by their politeness and friendliness.

I applaud the efforts the Hu-Wen team is making to heal the wounds between the two nations. For the long term stability of Asia the two nations need to play well together.

From a layman's point of view, as China's economic growth compounds, and the amount of $$ poured into R& D is stepped up in the same proportions, China may close the 50-year technological gap much faster than predicted.
But, given the dire state of the environment the gap in skills caused by the 70s and the turbo growth, China needs Japan's help to break through the next level quickly.
Pragmatism led Hu to declare a ``valued partnership''.
Whether China will actually benefit from the arrangement, remains to be seen. Japan is notoriously chary of ``transferring'' any technology, though in the case of China, given Japan's own economic interests and benefit, it may eventually find it in its own interests to do.
If China is prepared to bury the past for the sake of the future, Japan should also learn that past reality should be accepted without regular denial and revision.
An acceptance of history does not make Japan bad and China good. Brutality can overtake any nation - Japan, America and even China in the Mao era, when the dark side takes over. Japan should show the same maturity it constantly urges of China in their relations.
On the afternoon of May 12, just before the earthquake in China, there was a beautiful Shinto wedding at Meiji shrine.
I came across the procession, just as I was leaving the place. It was solemn and dignified, yet from their gait and demeanor, you could tell the couple were so happy and proud.
I had taken the train across town from Asakusa to pray at Meiji, for peace in China and Japan. But maybe it was too little, too late, and the descent into gotterdammerung had begun.
Six months exactly before that date (May 12), I had prayed to the Kannon at Senso-ji, and now had gone again for a specific reason.
Now my own sadness seems such a speck in the universe, compared with the terror, and loss the gods have inflicted on millions of random victims of nature's fury.