Some complained that this blog is too dull and too serious. So I try to balance the "seriousness" by interlacing with some light reading. So here it is.

update(Sep 21)...original bbs post series here: (1) (2) (3) (4) (5) ; streaming video interview just available on SCOL and here
To counter Elder Sister Lotus, China now has Younger Sister (Meimei) Heavenly (Tian) Fairy (Xian): Tianxian MM ("天仙MM") was first posted by a driver/photographer who stumbled upon a minority village (甘堡屯) in the mountain in Western Sichuan. The orignal poster called her Tianxian because there is a Chinese phrase for surprised beauty called Xian Nuu Xia Fan (and angel fell into the mundane world [by accident] ). Tianxian MM (her real name is Erma Ina) quick reached a bigger (and well deserved) fame than Fuyong JJ. She is a village girl from the minority group of qiang (羌), an ethnic group related to the Tibetans.

Tianxian MM is not as stunning as the TV starlet Zhang Lanlan.

I guess her appeal is from her innocence and purity, in the unpolluted rural area, and a culture unspoiled by the commercialized capitalistic Han.

This is an example that the ethnic conflict in China is much milder than in other countries, when minorities are generally admired and appreciated (yes, esp the girls, of course. In Super Girl Vocie Show, the minority contestants were always given special applauses and cheers from the Han audience). In fact, other than Han arrogance over the minorities (just like Shanghainese arrogance over Anhui/Northern Jiangsu), minorities are fairly treated and well respected in China (similarly for Tibetans as a minority and culture - the Tibet prosecution theories in the West were much exaggerated, in that Han people suffered the same fate during cultural revolution). e.g. one-child policy does not apply to non-Han ethnci groups, and many children of cross marriage choose to identify themselves as minority group, because of better education (and other) opportunities via an "affirmative" policy. Note also that Muslim is considered as a minority group, even though genetically many are Han Chinese.

See also the pre-fame photo of this innocent girl here (original is in auto.tom.com/forum) and summarized media report there. In the "pre-fame thread" the poster looked at TXMM's education bill in 1998, and expressed his guilty that he could have paid for one year's education (textbooks and fees) 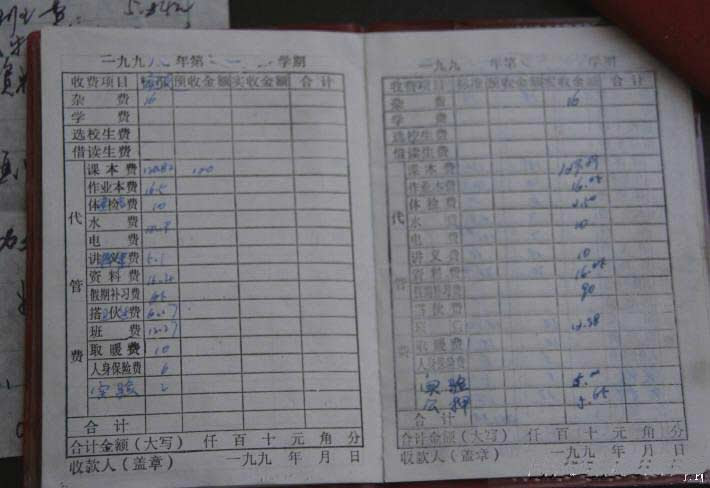 for this girl if he has one less hotpot meal. Let's be (wishfully) optimistic, and hope that Tianxian MM can become the ambassador for ethnic harmony and rural education.
(The links are in Chinese, but it is the pictures that are more interesting. and I am sure ESWN will cover this soon.)
---
update (Sep20): now ESWN did cover it :) so my laziness is justified. I knew his stories are always more interesting to read than the dull ones here.
---
update (Sep20): some people questioned about TXMM's finger nails and other feature. I can testify that this is not uncommon. TXMM has been a migrant worker working in Chengdu, and went back to the village to take care of her ill father. She spent some time in the city and learned about the nail polishing job.
1) It is very common for migrant workers to skip work for a few months and go home, either because of harvest/sowing season, or family problem, or unhappy work environment. Jobs are always easy to find again.
2) When we talk about migrant workers, we always think about those who move from inland provinces to the coastal cities. In reality every city in China has migrant worker. Young women from Sichuan villages would work in small cities in Sichuan, larger city (Chengdu), nearby province (Wuhan), or coastal cities (Dongguan/Shenzhen), all depends on how far she is willing to be away from her mom. The closer they are from home, the more often they would take breaks back home in between jobs.
update (Sep20):
...more photos here
...the reason the girl became friend with a stranger from the city: her brother-inlaw and sister-in-law despise the poor village but the photographer was able to respect the villagers. "她说我之所以没扫你兴、叫你爬，是你的那份真诚与固执打动了我。我嫂子嫁我大哥后，县城里的人，不得了哦，回寨子就一次，嫌这嫌那，住一天就奔山了。我姐夫，城里人哟，也总共来一次就奔山了，还丢下一堆酸酸话。你来，和乡亲们处得那么好，对爹妈、老人们那么尊重，对山娃儿些那么爱，我才一直在配合你到处走。你知道吗，你一走，闲言碎语有多少？别把山寨想得那么简单，长舌婆多的是！我回来住几个月议论就很多了！没出息、耍垮方了的人才会回来，这就是他们公认的道理"

The famed Super Girl was produced by Hunan STV. TXMM is a fan of Li Yuchun and Zhou Bichang.
- This the the pepper used in Sichuan Hotpot, RMB40/kg

- This a (normal fixed network) phone, and its antenna (via a cellular adaptor),

I've seen a Yahoo 360° page on her stating it was her's.
Since I saw that I searched the net on everything about her. Also, frequently looked into CCTV9 and CCTV4 (available here via satellite) 'cos I saw pictures of her CCTV appearance and thought she must be a TV Star in Your country.
Her sudden popularity I think is no surprise. According to the photographs she must be at least one of the worlds most beautyfull women.
Unfortunately living in far away China.
All the best wishes to You (and of course her)
Gerhard from Düsseldorf/Germany
gerd@ulmail.net

However mean your gold in wow life is,buy wow gold meet it and live it ;wow gold cheap do not shun it and call it hard names.It is not so bad as you are.It looks poorest when you are richest.The fault-finder will find faults in paradise.wow gold kaufen love your life,poor as it is.maple meso You may perhaps have some pleasant,thrilling,maplestory power leveling glorious hourss,even in a poor-house.The setting sun is reflected from the windows of the alms-house as brightly as from the rich man's abode;the snow melts before its door as early in the spring.sell wow gold I do not see but a quiet mind may live as contentedly there,cheap mesos and have as cheering thoughts,as in a palace.The town's poor seem to me often to live the most independent lives of any.May be they are simply great enough to billig wow gold receive without misgiving.Most think that they are above being supported by the town;powerlevel but it often happens that buy maplestory mesos they are not above supporting themselves by dishonest means.which should be more disreputable.Cultivate poverty like a garden herb,like sage.Do not trouble wow powerleveln yourself much to get new things,maple mesos whether clothes or friends,Turn the old,archlord power leveling return to them.Things do not change;we change.Sell your clothes and keep your thoughts.