Global security has a few satellite pictures showing the entrance of the Punggye-yok tunnel
(update 10/12, H-T commentator luistxo for google location tags, and from there a previous post by armscontrolwonk) 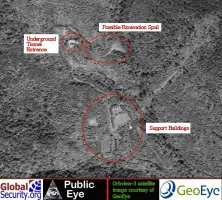 Google map links here. DPRK map here, the site is north of Chunhyung-ri (春兴里), or 17 km NNW of the train station Punggye-yok (豐溪驿） and just a few km south of the source of the river called Ŏrang-ch’ŏn. (渔郎川)

It is awfully close to the China/Russia border (180km vs 250km). I hope this time China will not tolerate this bad boy any more.

The site is also about 200km from Chosin Reservoir, where one of the bloodiest battle was fought between China and US in 1950, in which China scored a pyrrhic victory. There 25k of Chinese lives were lost (many thousand more by frostbite) for helping KJI's father.

P.S.
1) see Marmot's coverage for related reports. On the moral hazard that encouraged KJI down this path, a commentator there said, "if pakistan’s experience is any indication for the consequences of a nuke test, then north korea can count on being partners with the US in the war on terror within a few years. or they could follow india’s lead, and in that case they’ll receive american nuclear technology as a “punishment.”"
2) some reports say the location is around Hwadae Kun 花台. but it does not match the longitude and latitude information by USGS
3) USGS showed the depth of the quake is "0 km" below ground/sea level. It seems to confirm SK report that it is done through horizontal tunnel into a hill. NK's announcement that no radiation leak is likely a dubious claim. underground water will carry the radiation and it may be an environment disaster (which could affect NW part of the Sea of Japan and fishing industry of Russia)
4) Update: Globalsecurity puts the location at north of Kilchu Punggye-yok 吉州郡 豐溪驛（near 豐溪里), "the general proximate vicinity of the P'unggye-yok site"

5) Jane's Defence confirmed the location as "approximately 42 km northwest of Kilchu, in the province of North Hamgyong, on the remote slopes of Mant'ap-san Mountain."

Update: SK NIS claimed a different location about 50 km south, i.e. near Musudan-ri. Since the seimological data traces the strength and direction of seismic waves from different point to triangulate the epicenter. It is considered to be more accurate. Therefore, the USGS result of Kilchu Gun, Punggye-yok (吉州郡 豐溪驛), which agrees with a site where satellite surveillance revealed suspected activitities (see, e.g., Globalsecurity), is considered to be more reliable than the South Korean claim. I am of the opinion that SK intelligence failed again.

You can see several locations here and get maps that can be embedded in your blog (for other occasions, if you like): get code to copy/paste for this or that, for instance.

thanks a lot for your links. i will update my post.
the alleged 'entrance' on tagzania seems to be leading to the opposite direction from the epicenter, which shows there may be another entrance?