Danwei / Sanlian Life Week : Boom times for Chinese film, but what comes next?

What does this mean?

In Beijing, e.g., the movie ticket cost 50-70 Yuan (!!! yes, that is right, almost as much as that in HK). But it is cheaper in other cities and other cinemas (eg, 20-30 for Kunming). Therefore 2584/day means 100 people/screen per day (assuming 25/ticket), which is very small considering there are more than one show per day on average.

My personal experience:
1) Had been to a 1030pm movie on Sunday night in Oriental Mall in Beijing, we are the only audience there and had the whole screen for ourselves. The movie title was "CJ-7"
2) It seems the cinema was only clos to sold out during prime hours (600-830) on Tuesdays (when there is 50% discount promo)

Therefore, my observation and inference has been that something is wrong in the pricing. When you price a goods so high that the mass market cannot afford, there will be significant growth at income rises. Therefore, the 20%+ growth in the past 3 years, I venture to speculate, is largely due to more people crossed the income thresold and the ticket begin to become affordable to them, rather than "the movies were better made", as the reporter suggested.

I also dare to speculate, if the price has been cut by, e.g. 30%, the box office could have a growth much faster than the 20%+ p.a. However, price elasticity is a very tricky game. One really needs to try it out to find out the answer. The Tuesday sales boost could mean the inflexion point if somewhere under 50% but this may not be true, because the Tuesday audience could come from those who would otherwise go on Monday/Wednesday.

What the movie industry in China could do is to experiment a 'promotion' in a medium size city, to test the impact of different discount rates to the total box office income. (Here I assume that (non-pirate) DVD income is minimal such that there is no significant impact due to larger box office audience). An alternative is to experience with an "auction" to certain movie, but this is hard to implement technically.

When will China overtake the US economically?

This is a very old question.

I have done some calculation over 2 years ago.

The conference - a leading forum on the Chinese economy - addressed the major challenges and opportunities for China in 2008.

Roach kicked off his remarks by providing a comparision between the dotcom bubble burst of 1999 and the recent subprime mortgage crisis; he then focused on trends in global consumerism and the myth of Asia decoupling. He explored the challenges facing a growing China, as well as the increase in protectionism and currency risks that are playing out with Asia economic expansion."

Our goal is not just to give "that guy" 替死鬼 a fair chance to defend. Our further goal is to "shave the eyebrows" of the incompetent bureaucrats, i.e., the police and that stupid judge. Only by defeating the "reactionaries", only by bringing them to acknowledge what they have done wrongly, could HK be restored with the glitters of the past.

p.s. To the managers in Apple Daily and Jimmy Lai, to be fair you should also donate your share, by taking these ads at 'cost' or a deep discount, or put it to the front page while charging the lowest inner page price.
Posted by Sun Bin at 2/07/2008 03:19:00 PM Linked by 2 comments

This is a sad day for the Fragrant Harbour, and the darkest day.

This city has degenerated into one that serves the rich and famous. This is no longer the free city that we loved and enjoyed. There is no rule of law any more. The police went nut. The judges became pig. Hong Kong is dead, dead, dead! Whatever kind of education system, what kind of legal mason/society, whatever kind of pseudo-moral pressure, produced these types of legal pigs, we thuck you very much! 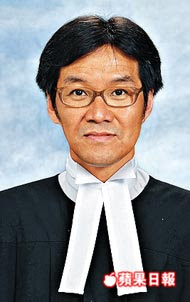 Let's fight back. Let set up an organisation, a fund, to support the Jean Valjean's who may have committed minor crimes, but were prosecuted unfairly. This is not about moral or ethic, this about naked justice.

Without justice, without rationality, one day the rule of tyrant will fall upon us.

Related:
1) 有人敢企出來報警嗎？
2) article23.net
3) I have no far refrained from expressing my personal view on the "scandal" itself. Perhaps Monk Yankong has now said what I wanted to say about this incidence.
Posted by Sun Bin at 2/02/2008 08:07:00 PM Linked by 5 comments