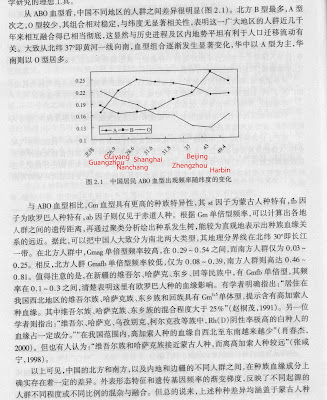 This is a great book. There are so many interesting informations that I will probably use a few posts to show them. I am also surprised that the book isn't available at Amazon China -- it probably reflects this verture is in pretty bad shape here.
The datamining in China's population geography yields many interesting observation such as this one, the plot of blood-types by the latitude of the residents, which show clear trends in different blood type as we move north. I scanned the whole page as the discussion also include that for Rh factors and some explicit comments on some ethnic groups.
There are other features such as eye-lid, curly hair, etc., which differs according to the different locations in China. These data are consistent with the theory that Chinese people have mixed in the past thousands of years. The people in each area may still retain some of the original features of the dominant ethnicity in the early (pre-mix) days but today the boudary is blurred but statistically one can still recognize the traces. This supports the theory that the so called "Han" ethnicity is more of a cultural entity (rather than genetic). Since we are indeed from the same big family (well, one could extend this to discussion beyond a state boundary) what is the point of fighting against one another'?
Related: Mysterious Mummies? Maybe 10 Years Ago.
Posted by Sun Bin at 12/04/2008 02:56:00 PM

very interesting to know the diversity within han chinese