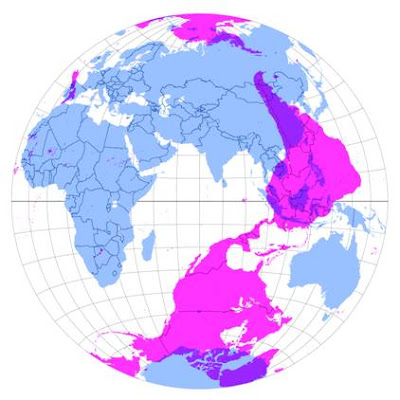 (Via Armcontrolwonk) This map shows where the opposite (anti-podal) point on the earth is. i.e. North Pole corresponds to South Pole. One can easily check up one's anti-podal point by change the coodinate (change lattitude from N to S, then add/subtract 180 on longitude). But it is neat to view this on a globe.
ACW cited this when he read that vibration typically get 'magnified' on anti-podal points as noted by astronomers observing the moon and some planets. He thinks this may be used to measure earthquake (and nuclear tests).
The physical explanation may be quite simple, as the anti-podal point represents THE equi-distant (both on earth surface and via the mantle/core) point, such that all waves arrive IN PHASE (ignoring fluctuations in rock type/etc). This means it would be difficult to measure earthquake anti-podally since these are random events and one does not know where to place the probe in advance, but for monitoring nuclear tests with known sites this could be pretty effective.
A few interesting observations
---

The map above shows the wave-front of the DPRK shock (test). Ideally these contours should be circle, but they are distorted because of rock/water structure the p-wave passes through (changes the speed the sound wave travels).
Given these contours, it is now easy to measure future shocks (from the same location) much more accurately. The trick is to put an array of probes spaced on a chosen contour such that the signal these probes received are all "in phase". Adding these signals (time-plotted) up will result in strong signal since the noises are not in phase and tends to cancel out. This will achieve similar or even better results than a measure from the antipode.
Posted by Sun Bin at 5/27/2009 03:05:00 PM

Hello, friend:
I saw your interesting blog. I would like to change links with you.
I have 2 blogs:
www.pasajedeportivo.blogspot.com
http://del-verde-caiman.nireblog.com
Tell me, please, if I can put your blog link in my 2 blogs. I hope you do the same with mine/
I hope you respond soon.
Rafael