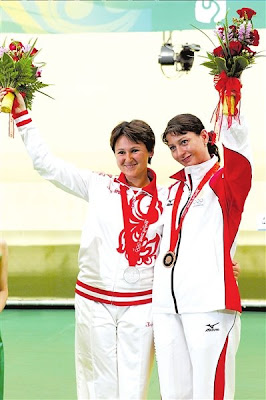 The Silver and Bronze Medalists of 10m Air Pistol. (story)

The Gold Medalist (China's Guo Wenjun) perhaps was not aware of the politics outside the stadium, and appeared puzzled when they took a picture shunning her. So she gave an Olympic doll she received to the Russian lady as a gift.

p.s. congrats to India for its first non-hockey gold. The CCTV reporter who wanted everybody to remember Beijing should be happy (he wished Phelps will win 8 gold so that everybody will also associate his 8 golds with Beijing).
Posted by Sun Bin at 8/11/2008 10:20:00 AM