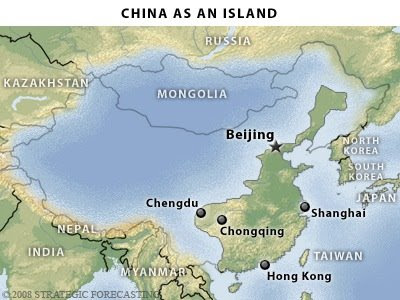 John Mauldin's "Geopolitics of China" (p.s. based on Stratfor's analysis) is a very good treatise on "what China want", starting with its geopolitical constraints, to what it logically needs and matches with what historically (and even today) China's (geopolitical and) strategic goal is.
I have a few notes but these do not change the key theme and flow of Mauldin's analysis. So please go read it, judge for yourself before coming back for my notes below.
Geopolitics 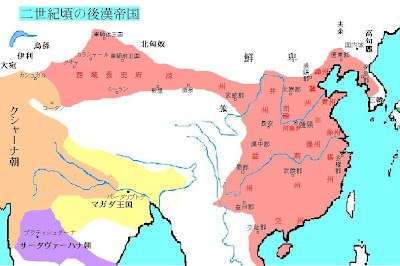 Mauldin then went on to assert that China has 3 geopolitical imperatives
#1 explains why presnt day PRC was so obsessive on Taiwan, #2 expalin Xinjiang and Tibet. While Maudlin was discussing about Mao's strategy, I should also add that Mao made a point not to build infrastructure (to isolate China from external invasion) in the buffer areas and located all the strategic industries deep into the mountains (again, to be more defensible)
Maudlin was right on when he commented on the implication of the Korean war, "From the Soviet point of view, fighting between China and the United States was the best thing imaginable. But from Stratfor's point of view, what it demonstrated was the sensitivity of the Chinese to any encroachment on their borderlands, their buffers, which represent the foundation of their national security" Yes, Soviet managed to play China against the US and thwarted China's development for about 30 years. But this eventually led to the Sino-Soviet split and Nixon's visit. And the rest was history (without China US could still win the Cold War as that is inevitable, but it could take a couple more decades).
Maudlin discussed about the premise in which China feels the threat from US Navy. However, as Maudlin concluded, such a concern is only economical, to achieve such objective US needs only to stop trading with China (rather than a blockade). In other word, there is no reason for US to blockade China.  The real objective of China's naval aspiration (or that to prepare against a sea blockade on the east), is Taiwan. The only reason US may impose a blockade to China is if war breaks out in Taiwan. PRC does not like that idea.
---
Finally, one piece of good news (vs Maudlin's concern in his concluding paragraph that the rift between coastal and interior China could destabilize and perhaps lead to catstrophic results in China), is that modern technology has greatly shortened physical distance, to such an extent that the distinction between coastal and interior China are much blurred after China completed it new road network at the turn of the century. As of today, we have already witness strong growth in the interior (and migration of factories from coastal to interior). Meanwhile, as China's economy grows it becomes more frequently a customer of the good it produces itself, which aleviates the dependency on export. What China needs is to toe the line carefully and buy time to become less vulnerable to external economic turbulence. The 2008 recession is the biggest test it has to cope with.
Posted by Sun Bin at 10/12/2008 12:02:00 AM

The map (above) is not entirely accurate for those who know the geographies.---


yEAPP, You are right. he should exclude Manchurian areas too.

btw. Why has he colored Mongolia blue?

--e.g.among places excluded in the "island" are Xian which is part of the "China proper", historically, politically and demographically,--

Xian was exluded by Mongolians when the great Khans invasion forced "Chinese" to migrate into Kanton areas. Today Xian is a same "chinese" like Manchuria or inner Mongolia.

--and a number of other locations such as Liaodong penisular.--

) realy.. why dont you say that Seoul was chinese capital?
(btw. i hope you have not fogot about that funny law of manchu (who rulled China until declaration of "Chinese nation and republic" wich forbided chinese to setle in Manchuria?)

i think it is YOU who should start to read historicaly maps and recognize that he is talking about the "Chinese" Nation and not the "Land invaded and assimilated by chinese".

"(i.e. NW coast down to south of Pyongyeong) was included into the Chinese empire until late Ming)"

Funny is that Ming were Ming and not "Chinese".

gosh.. Seaking of geopolitics i think you should find a map wich does show wich population and land declarated themselfes as "chinese" and wich were conquered and invaded by Chian Kai Cheks and Maos armies..

--China was really defended by naturally barriers from all sides with the technology a couple hundred years ago -- e.g. This East Han map (from jp.wiki.org) where Han expanded wherever it could constrained only by geography--

This map show Han relationships not Han Empire.
Aside that Han Empire never dclarated itself as Chinese. So can you please stop to use it for the justification of chinese nationalism, colonialism and imperialism? THANK YOU!

Neither is Manchuria a part of China, nor was "Han China" (That part of Han Empire wich was used to be called "China") conquered by Machus. just because As Manchu started to invade into China Han Empire was long time vanished..

WEll.. speaking about geography and demographics; first of all Gobi is not a Part of China. its still a part Of
Mongolia .
Second; he is speaking about a population wich is inside of this "Chinese Island".
Third; PRC is not that bad populated like European West. Compared to Europe by geographical and population borders Peoples Republic of China has only 400-500 millions more. i hope you can see own map one topic deeper.. and realy, be happy i am not talking about such countries like India or Bangladesh..

-- understanding this will help one understand why the PRC leaders often talked about survival as one key elements of 'human right", they are serious about this, historically many people die (in fact, famine was commonplace in Chinese history) whenever there was upheaval (and vice versa)--

yeahh.. let me see this "survival"; Citizen War, Invasion into Manchuria, Tibet, East Turkestan, Colonialism of conquered Land by the wrong agricultural planing und use.. then "Great Leap Forward", "Cultural Revolution", "Kolhos-agriculture", "Wrong Monocultures" "Industrial Monocultures". (Mongols still loling their arse off when they remember how Chinese tryed to make their stepe and waste Land to "green oase with Bamboo and happy smiling pandas" back in 50-70ens..)

--As mentioned above, historically the "buffer zone" would include Vietnam and NW Korea --

For PRC not for China.. And i am speaking about modern History and not your immaginary "Han were there" nazi-crap..

--both people were very much sinicized, culturally advanced and often friendly to (pay tribute to) the Han China---

Bullshit neither were they sinized nor were they "friendly" to the Han China. All what they did were a bow to Han Rullers and their armies when they knocked on their doors. btw. "pay tribute" means not to be owned by Han Empire. Aside that Han Empire payed tribute to Central Asian and Indian Kingdoms.(for save trade routes) Wana to talk who is a real historical and political owner of PRC now?

---As a matter of fact, they used Chinese character until very recently--

Nope.. They used chinese writing language and not until now. btw; many Chinese can talk in English now. are you trying to tell us something now?

--It should also be noted that historically China was often "forced" to expand, notably the westward exploration in Han (and also Tang) was forced on by Mongolian (Hun/Turk) invasions.--

That is Bullshit and you know it. Or are you going to tell me that genozide on Djungars and sinisation (aka Aryanization chinese way) was forced by themselfes? how dumb can a human be then?

Speaking about The Geopolitics of China you are failed to understand John Mauldins position and leaped into sinocentrism, imperialism and chinese nationalism..

pitty.. and he was just trying to uderstand chinese point of forign politics..

@anonymous: Most of your points are interesting, but you don't need all of the insults to state your argument.

He doesn't have a point. All he showed was haphazard ranting. :)

I think the original idea of China as an island is not from estimable John Mauldin. He is just quoting an article from George Friedman, the Founder of Stratfor.com. So your topic John Mauldin "geopolitics of China" is not entierly accurate.

I read your comment on the pay scale of public servants in China. It is insightful. How can I reach you? My blog is http://blog.sina.com.cn/wumuluan
you could find my email.thanks.
Alfred

blackmoor,
thanks. i do not have the original stratfor article but maudlin did acknowledged friedman. i would add a note to the top of the post.