Diametrically opposite figures in the top 100 public intellectuals

Coming Anarchy questioned my earlier post on China's "peaceful development", after Japan sent out its fighter jet 30 times in 7 months into the disputed water. Maybe we have another indicator here.

These are their ways of dealing with the dispute. I believe they will maintain restrained, and the little hip-cup should not be over-read. The only question is, why not use UN arbitration?

Now Foreign Affair and The Prospect has selected their Top 100 public intellectuals, of which 5 are Chinese and 2 Japanese. The architect of "peaceful development', Zheng Bijian is on the list.

The political figures are diametrically opposite in these 2 countries: 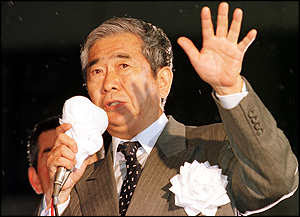 There are doves and hawks on both sides of the East China Sea. But it looks like China won a PR war, at least amoung intellectuals.

Do intellectuals influence how their fellow citizen think?

How do we explain a democracy which elected a racist, sexist lunatic? Déjà Vu?

(**) I wonder why Murakami Haruki is not on the list. He is, arguably, very influential in Asian pop-culture, including movies of Wong Kar Wai. He also has spent most of the past 15 years in US. He is better than Ha Jin, and as good as Gao Xingjiang.

>>How do we explain a democracy which elected a racist, sexist lunatic?

People are generally racist and sexist lunatics, so it isn't surprising.

About these lists, I think they choose people based on influence, not on whether they agree with their ideas. And that "influence" is limited to other intellectuals and policymakers. Even by this standard, there are people on those lists that don't belong there.

Yeah, all these 'lists' are imperfect. Interesting to read, and maybe indicative, but not to be taken too seriously.

---
It also shows that in Japan (and oriental societies including China), people are in general less sensitive to these issues compared to US or even Europe.

I just hope they voted for Ishihara because of the municipality issues. If he becomes PM, that would be quite worrisome.