I watched a beautiful movie in the plane 2 months ago, the Painted Veil. Great lead actor and actress, splendid cinematography and that. I love the movie.

There is only one small problem that has bothered me. The village is filmed in the Guilin area, chosen for its picturesque Karst landscape (Guilin to Karst is like Sedona to the Monument Valley, i.e. avec water and greenery), while one important thread is that the cholera infected village is easier reached from the Chinese city where the Fanes lived by water. Shanghai and Guilin belong to 2 different water system and so there is no way one can take a boat from Shanghai to reach Guilin - as shown in the map below. (but actually it is feasible -- thanks to the First Emperor Qin -- see note below)

The two systems are separated by watersheds, indicated by the black lines on the map. The 7 major rvier systems in China are

Other than the 7 systems, there are

Coincidentally, if the film-makers were to follow the settings of the original book, the city Walter lives would be HK, not Shanghai. One would then be able to sail from HK upstream to Li Jiang in Guilin (via Guangzhou/Pearl River, Wuzhou/Xi Jiang/Guijiang and finally reach Li Jiang (LJ in the map). 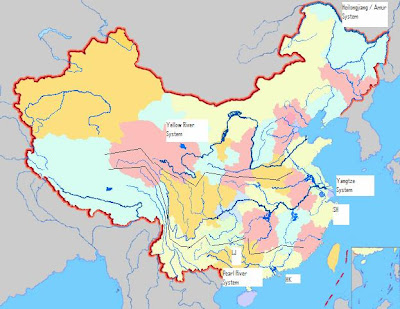 Note:
1) Another tidbit is that the Chinese government back then would not have employed a British micro-biologist. But the Colony of HK would
2) There is actually a canal, Ling Qu, built by Qin Shihuangdi, connecting the Pearl and Yangtze systems. But it is unlikely that one would take a boat from Shanghai to Guilin via Ling Qu.
Posted by Sun Bin at 6/06/2007 05:08:00 AM