Lhasa anecdote (1): The adventure into the alleys 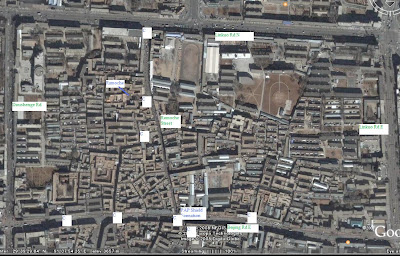 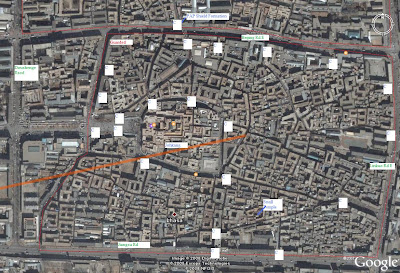 There were check points in the alleys around the 2 blocks leading to the 2 major monasteries which seems to be the focal points of the riot in mid-March. (above and below photo from google earth -- see coordinates at the bottom of the first map)

They checked IDs at each point. Only residents were allowed in.
Therefore, most businesses in the alleys were closed, except for convenience stores and small Tibetan teahouses, which caters to the locals.

I picked a small alley and ventured into the North (the Ramoche block). I was surpised when they just let me in without a question, after checking my ID. I proceeded and went to another check point (marked as "C's" on the maps above) and asked the guards how to get to Romoche Monastery (I was a bit lost inside the alley maze). The young men even told me the direction. "make a left", "Is it closed?", "I don't know". So I was happy until I reached the east gate of Ramoche, where I saw a dozen PAP hands in hands blocking the gate. I asked and was told to go away (not surprising by then). I took a picture with my handphone pretending to be talking (see picture below, I couldn't look at the screen when I ended up taking the left 1/4 of the gate).
I wandered around a bit in front of the Ramoche. There are plenty of people, children in school uniforms are going home, playing soccers in the alleys. If you ignore the PAP, it is almost like a usual afternoon, sans tourists.

My adventure to the Johkang block was not as lucky. I was turned away a couple times at the alley entrance. The young soldier (in green, see picture below) went to ask his superior (who wears no helmet), then they asked another PAP in blue (looks like Tibetan, I suspect the blues are local and the greens are from Neighbouring provinces). I almost gave up. But I finally got lucky when I tried a small alley where there were only a few junior PAP. Even after I got in, there was another layer of check points on exits to Bakhorn. I pretended I was lost and they again let me in.
The soldiers were perhaps told to be polite. They salute before and after checking IDs. Saluting seems to be part of their routine.

There are small temples inside the block there are still open. But I had no luck seeing what is beyond the walls in these 2 major monasteries.
---
See pictures below
Gate of Ramoche Monastery(小昭寺). Guarded. 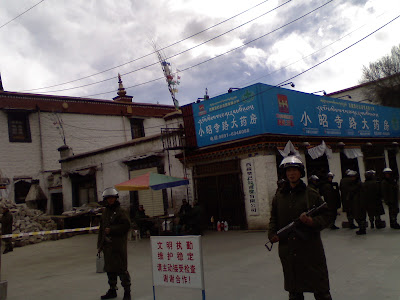 Front (west) door of Johkang Monastery (大昭寺). Guarded. (but fewer gaurds than Ramoche, perhaps because there is a large plaza as buffer zone) -- this photo was cropped as my finger was blocking the right hand side of my camera-phone 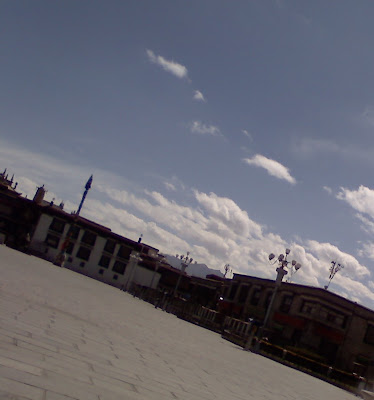 North side of Bakhorn Square, deserted as no tourist allowed in 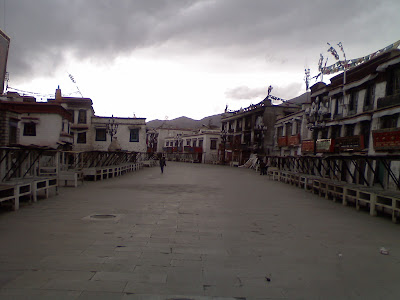 North side of Bakhorn Street, taking this picture almost got me into trouble. The PAP asked to check my mobile phone suspicious of me taking pictures. I showed him my blackberry which had no camera function:) 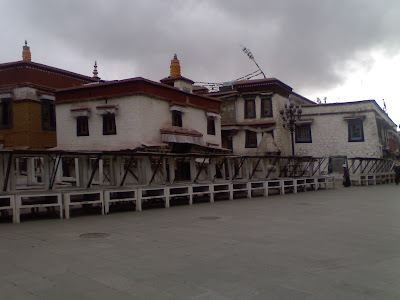 Ramoche Street. Between the Ramoche Temple and the famous PAP Shield (south entrance of Ramoche Street). enter with ID check but still quite busy 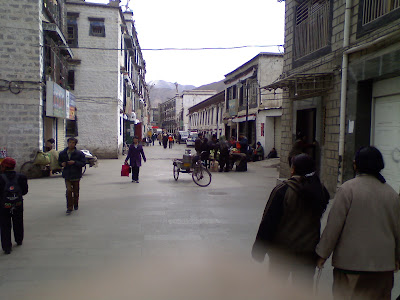 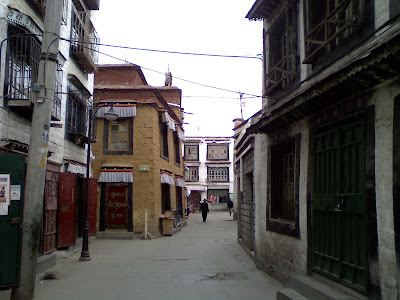 North of Johkang on North Bakhorn, old Tibetan ladies were amused at my hiding behind to take pictures. They were friendly. 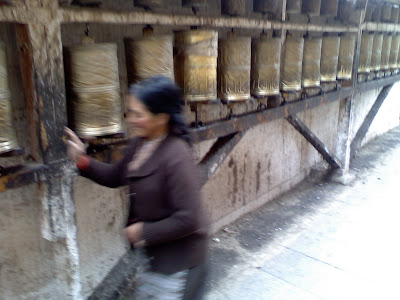 Solar pot, in a residential courtyard, in alleys east of Johkang Monastery. A couple middle age ladies were looking at me suspiciously when I walked into the courtyard, but smiled back when I smiled at them 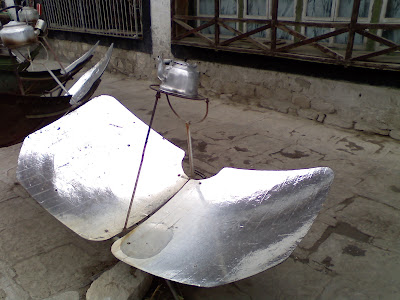 This is inside a small temple south of Jokhang, in the same block ("small templet" in the satellite map). Open, looks like business as usual 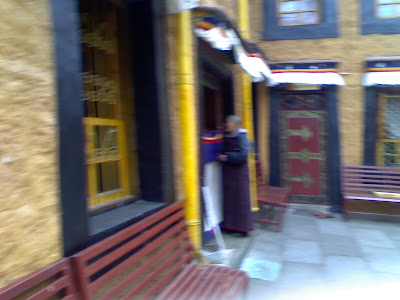 Children after school, in the alley 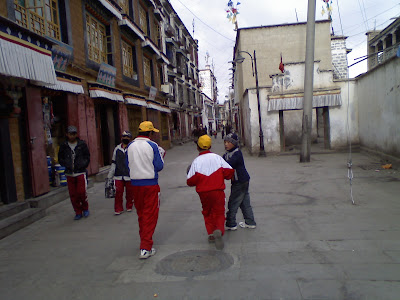 ---
There pictures below were taken outside the two blocks. 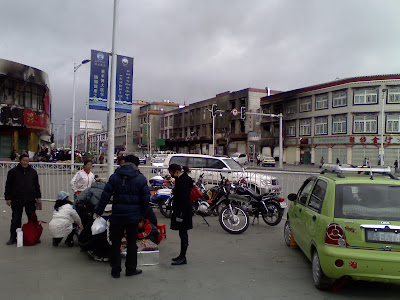 The Bank of China we see on TV. 20 metres east of Ramoche Street (the famous PAP shield picture), south side of Beijing East Road 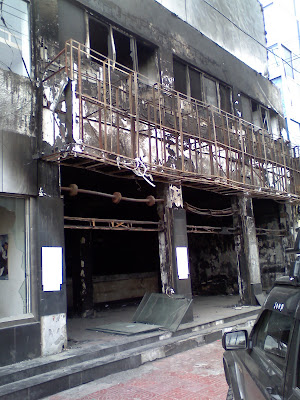 ---
Note: personal bloggers are welcome to use these pictures, as long as you do not crop the picture (the pictures here are the original ones without cropping), do not distort through captioning, and provide a courtesy link/acknowledgement.They should not be used by any organization (profit or non-profit) without seeking permission.This is the first time I put up such note. But I do not want my pictures be distorted as Kadfly's shield formation picture was.

Thanks for all your information. So you were one of the journalists who was allowed to go to lhasa recently. With your permission, I shall use some of your excellent articles in my blog at http://ozlam0713.mysinablog.com/ . If you dont mind, I have to paraphrase yours since my blog is Chinese; I havent figure what to do yet. May be I just introduce yours, esp. the photos for other bloggers to contemplate them. Many thanks for your inside information anyway.

thanks for stopping by.
i am not a journalist. i am just a tourist.

please feel free to use the pictures. as i said in the note above, as long as this is not used for commercial or political purpose, you do not have to check with me, i would just appreciate a courtesy link.

Sorry I misunderstood. But later on when I read on your blog, I found out that you were not an journalist. Yet you got to lhasa all the same and thanks for sharing the photos. I have put your piece as 延伸閱讀 and decided to leave it as it is, without any translation or addition, as hk people should be able to read anyway.