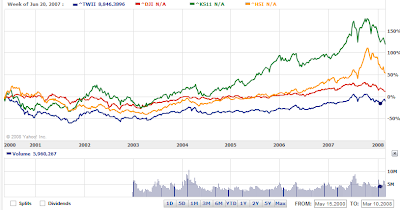 On May 20th 2000, when Chen Shui Bian took over, TWII was 9120, Korea KOS 731, Hong Kong HSI 14478, Dow Jones 10627.
On Mar 19th, 2008, before the election, TWII was 8179, KOS 1622, HSI 21867, DJI 12100.
TWI underperformed all the benchmark markets, and fell by 10.3% while the closest benchmark(with similar industry mix, stage of economic development and market) KOS rose by 122%.
This is the price the people of Taiwan paid for the pursuit of ideology. (note also that the lag started to widen significantly in his second term -- sort of echoing my hypothesis in my previous post regarding long term accountability)
---
p.s. Some may argue that TWII also underperformed under the pragmatic Ma Ying-jeou. But it was not nearly as worse/significantly, albeit there had only been a few months and we need more data to test. TWII underperformed the benchmarks by 10-15% in the past 6 months
Mar 19 to Oct 9, 2008 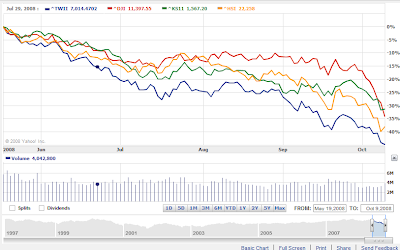 ---
Not really related: on a separate topic of the infamous  Arms Procurement Deal, US Presidential Candidate McCain has offered his candid insight
It is just about the money. So no need to get too upset, Mr Hu, nor get too excited, those on the island.
Posted by Sun Bin at 10/10/2008 02:02:00 PM

Having worked as a stockbroker in Taiwan during and prior to the CSB years I'd have to say that blaming the Taiwanese people for choosing ideology is: 1 - silly and incorrect, 2 - spiteful.

Well, this surprises no one, anybody knows what chen Shui bian is by now.

well, i am not blaming Taiwanese people. 1) Many people in Taiwan, including those who supported and voted for CSB, e.g. Chang rongfa of EVA Airline, are against his policy.
2) CSB is not the only person who put ideology in front of his people. Mao Zedong, Stalin, Saddam, Khomeini are other examples.

p.s. Lee Tenghui's ideology is not too far from CSB's. But his track record in economy is much better.
Either Lee TH has more check and balance inside his cabinet/team, or he was actually more pragmatic, we do not know. But we will give him credit judging by the results. -- i.e. the "prior-CSB" years.