The curious case of gender imbalance in Hong Kong

This chart is from an old post in Simonworld (where are you now Simon?).

It does not need much explanation. In 1990 There were more male than female across all age groups (till around 60 when men begin to die a lot faster). By 2005 (15 years later) the females outnumbered males VERY significantly.

It must not be a result of "natural process". In fact, the female:male ratio at birth has been at a fairly stable 49:51 throughout the 1960s, and grew to 48:52 by 1980s and stabilized through this date (i suspect a small amount of selective abortion led to this rise), according to HK Government Census (you need to download excel format to see all the yearly data).

Well, it must be non-natural, which is immigration - emigration - death.

Death rate is small for younger age (typically under 1% as we can safely assume). Since one does not need to give up the residency in Hong Kong, emigration has no impact on HK ID card holder (but I am not exactly sure about this, which depends on the definition of the census). The reason must be deal to NET immigration.

How could this happen? Well, the most likely cause is, HK men married women from outside HK (mainly from mainland China). Therefore, if you read from news that it is a lot less likely for HK ladies to find a husband locally because of the gender imbalance, don't believe it. They are either confused or lying. The fact is: because HK men chose not to marry HK women (for various reasons), therefore there is a gender imbalance. The imbalance is not a cause to whatever phenomenon, it is merely a RESULT. Because of this choice by some men in HK, the gender ratio became imbalance. This is a significant difference. Kong girls cannot find a husband not because there are more Kong girls than Kong guys, but because Kong guys enlarged their target geographically while Kong girls did not (as much).

If one has the gender split of HK's immigration data, the myth of the gender imbalance would be easy to solve. Since I couldn't find such data, I had to do some calculation on my own. I took the population of each gender in an age group, e.g. 10-14, in 1991, "age them" by 5 year and compare with the age group 15-19 in 1996, and so on. The I calculated the % non-natural growth for each gender cohort for the years 1981-2006 (in 5 year increment). Finally I calculated the difference in these % non-natural growth. A high difference % means there is a significant difference in the non-natural growth (net immigration) between the two genders.

This is what I found.
(detailed calculation and related data (download from HK Census site) are here)

(there are some other % that can be explained plausibly. e.g. the % in older age also shows a similar pattern, but that is because females live longer than male and therefore the base population of female is much higher, for 85+ group in 2006, female: male is 68:32. It is then not difficult to understand why the death RATE (per year, or per 5 year) for female is much lower than that of male)

--
p.s. (from commentator) please see pineapple farm's analysis 2 years ago (in chinese), I am basically repeating what he observed. pineapple farm also provided a link to the immigration statistics, which confirmed my hypothesis. You can see, for the 25-34 age group, women outnumbered men by around 10x, at 79499 vs 7940 from 2002 to 2006 (5 years net of 71559). From my calculation, non natural for the 5 year period is 61700 vs -3000, net=64700. The definition my be different as the age group shifts every single year plus there are immigration from other country and death/etc., so my estimate was pretty close. 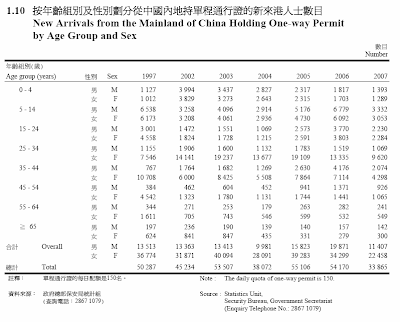 You can find the details of immigrants from Mainland in Section 1.10 of the following report


My previous blog about this:

Thanks for the information. Excellent piece of work! Always enjoyed your analysis.

I think most of the unnatural increase on the female population group of 20-45 over the last 15 years could have been attributed to the concubines / mistress / second wives of middle-age Hong Kong men migrating to Hong Kong. The annual increase of population of that age group, I suspect, will be highly correlated with the increase in the divorce rate over the same period. Would have been an interesting study indeed!

thanks, if i had read your post i won't have to write this :)

well, in fact, i myself was not quite sure about the 'concubine'. most likely these people are the officially married wives (otherwise they cannot apply for immigration), and it is usually quite a few years (5+) after the marriage when they arrive at HK. therefore, i am still not very satisfied with how to interpret the 20-25 age group.