Exhibit 2: The contribution of exports, measured as DVAE, to overall growth has fluctuated significantly in recent years.

Is China’s economic growth largely dependent on exports, or is it becoming more domestically led? That’s a question economists are vigorously debating—and an important one for policy makers and executives alike. An increasingly consumption- and investment-focused Chinese economy could improve the chances of more balanced trading relationships with developed economies. At the same time, businesses operating in China or planning to enter it could find greater opportunities as the economy accelerated its transition from a manufacturing center to a key consumer market.

To shed light on this question, we developed a new way of measuring the role of export growth in China’s overall economic expansion. We found that exports have been a major driver, but not one as dominant as commonly believed. Indeed, there are clear signs that a shift toward domestically driven economic growth is well under way. The picture that emerges of the Chinese economy has implications for the growth and supply chain strategies of businesses in China and elsewhere. 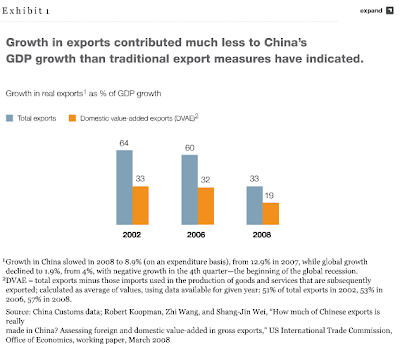 A different way to measure exports

Arguments over the true nature of China’s economic reliance on exports have been rooted in the difficulty of appropriately measuring the export sector. The traditional measure governments and most analysts use is the growth of total exports as a share of GDP growth. This measure indicates that export growth has accounted, on average, for almost 40 percent of the total growth in real GDP since 1990—rising to almost 60 percent since 2000.

Yet these numbers, portraying a dominant and growing role of exports, are at odds with the fact that China was one of the few countries that escaped the great 2008–09 global downturn without a major economic slowdown—suggesting that internal growth played an important role. That’s one reason other economists have used a very different measure: growth in net exports (total exports minus total imports) as a share of GDP growth. By that metric, exports contributed only between 10 and 20 percent of China’s annual 10 percent GDP growth in recent years.

We contend that both measures are misleading. Using total exports neglects the fact that many of China’s export shipments include a fair number of imported goods that are reassembled, combined with domestic content, or otherwise modified before being exported. Failing to remove these imports from the total export figure overstates how much value exports contribute to GDP. On the other hand, a strict net export measure (exports minus imports) underestimates the contribution of exports to GDP, because many imports aren’t used in assembly and exported but rather sold to Chinese consumers and businesses.

We calculated a measure we call domestic value-added exports (DVAE) to assess more accurately the role of exports in GDP growth. DVAE is what you get after subtracting from total exports only those imports used in the production of goods and services that are subsequently exported. In automobiles, for example, finished imports are not subtracted from our measure of exports. But engine parts imported to manufacture motor bikes for export would be. 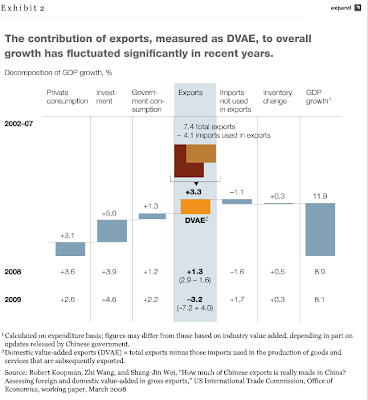 Governments usually don’t break out total imports into those used domestically (for production, investment, and consumption) and those used for exports, and China is no exception. So we estimated the country’s DVAE by using data from three different sources, each with its own strengths and limitations. The results were remarkably consistent—and collectively shed a powerful light on the evolution of supply chain strategies, Chinese consumption, and Chinese economic performance during the global downturn .

On average, our analysis suggests that imported goods accounted for 40 to 55 percent of the value of total exports from 2002 to 2008. Put another way, roughly half of China’s exports represent domestic value added. Concurrently, DVAE’s share of exports generally has risen over time, suggesting that China has become less of a pure assembler of imported goods—a publicly stated government policy goal.
That has implications for many companies’ supply chains and business models. If your company is a manufacturer in China that is primarily processing intermediate components for reexport—a Taiwan-based original-design manufacturer (ODM) of household goods, for example—it’s probably time to consider alternative locations for the assembly work. With China moving up the value chain and beginning to export more skill-intensive goods and services, chances are that pure assembly will soon be less costly in other parts of Asia.

We also applied our DVAE analysis to reassess the contribution of exports to GDP growth in the years for which we have overlapping data among our three metrics. We found that China’s export sector contributed 19 to 33 percent of total GDP growth between 2002 and 2008 (Exhibit 1). That’s only about half of the export contribution indicated by traditional total-exports measures.3

In other words, DVAE analysis suggests that exports have been an important driver of China’s growth, but not the dominant one, and that most common wisdom overestimates the role of exports while underestimating the role of domestic consumption for China’s growth. Any Chinese or multinational company that currently manufactures goods in China and primarily exports them to other countries should ask itself whether it needs to scale up its domestic strategy to get a bigger piece of the pie. This involves developing a more granular understanding of the Chinese market, making products that appeal to the Chinese consumer, and finding ways to market and distribute them effectively—all while contending with increasingly formidable Chinese competitors.4
China’s ‘downturn’ and the road ahead

A comparison between DVAE’s contribution to growth and that of other major macroeconomic components shows that DVAE topped private consumption, but was less important than investment, over the 2002–07 period (Exhibit 2). In the downturn years, 2008 and 2009,5 exports contributed much less to growth than other factors did, which explains why the Chinese economy could not fully match its GDP growth rates in the earlier part of the decade. However, the shift to a greater role for private consumption, investment, and finished imports explains how China could weather the downturn well and indicates movement toward a domestically focused economy, even though exports will probably continue to play an important role when the global economy picks up.

Of course, continued changes in the value of the renminbi in the coming years will also affect the evolution of Chinese trade. The more value-added-focused export sector suggested by our DVAE analysis implies that a greater share of exports will consist of higher-priced goods that compete more directly with those of developed nations. That, coupled with an appreciating Chinese currency, points to the creation of more balanced trading partnerships with the rest of the world—and an important shift in context when businesses consider future strategic moves in China.

About the Authors
John Horn is a consultant in McKinsey’s Washington, DC, office; Vivien Singer is a consultant with the McKinsey Global Institute; and Jonathan Woetzel is a director in the Shanghai office.

Notes
1 In this article, we address only national GDP, not employment or regional effects within China. Our interest is the overall health of the Chinese economy, and we leave aside the question of which groups or regions are better off because of any changes in the overall level of exports.
2 Calculated from the McKinsey Global Institute (MGI) China urbanization model.
3 Not surprising, exports measured by domestic value-added exports (DVAE) contributed more—almost two times more—to GDP growth than exports measured on a net basis. DVAE therefore represents a middle ground between total- and net-export measures.
4 See Jeff Galvin, Jimmy Hexter, and Martin Hirt, “Building a second home in China,” mckinseyquarterly.com, June 2010; and Yuval Atsmon et al., “2009 Annual Chinese Consumer Study, Part II: One Country, Many Markets—Targeting the Chinese Consumer with McKinsey ClusterMap,” McKinsey Insights China, September 2009.
5 The DVAE for 2009 is based on data from IHS Global Insight only.
Posted by Sun Bin at 10/01/2010 10:37:00 AM