BBC Pictures on China's democratic progress, in the spirit of gradualism 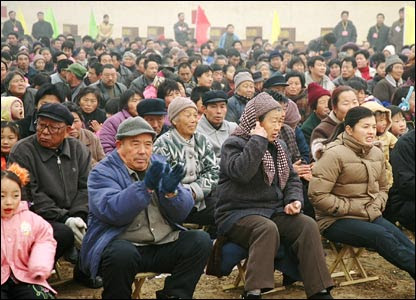 On a chilly December morning in Liuqian village, in China's Shandong province, 1,286 people – 94% of those villagers eligible to vote – gather in the local school playground to elect a new village committee.
Committees are responsible for the day-to-day management of villages, and since 1998 the law has stated that they must be directly elected by the villagers themselves.

Some experts believe that this could be the start of democracy in China. 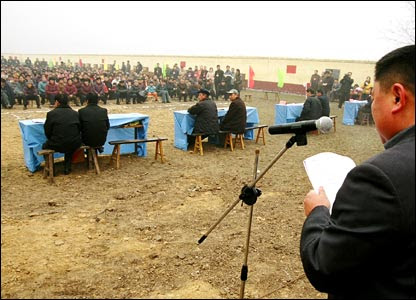 A candidate attempts to win the villagers over with a pre-vote speech, as election officials look on.
Six men are competing for three-year terms of office and all but one of them are Communist Party members.

Some say that far from encouraging democracy, village elections actually reinforce Communist Party control because they increase its legitimacy 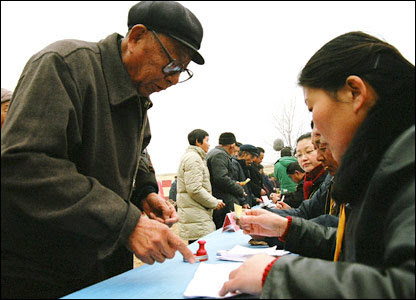 The villagers queue up to register and each of them receives a ballot paper.
In a country where many middle-aged and elderly people are illiterate, fingerprints replace written signatures as proof of registration.

Beside each person's name a fingerprint is carefully placed in red ink. 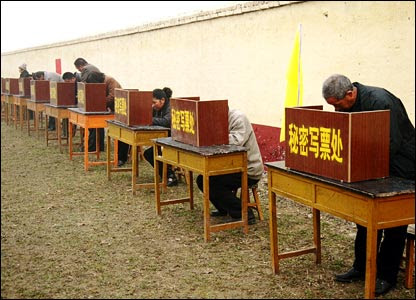 At private voting booths the electors make their choices.
Villager Liu Kuan is hoping for: "Somebody who is capable, who can contribute to Liuqian village, and who won't embezzle money."

Corruption among officials is a primary concern for the people of China. 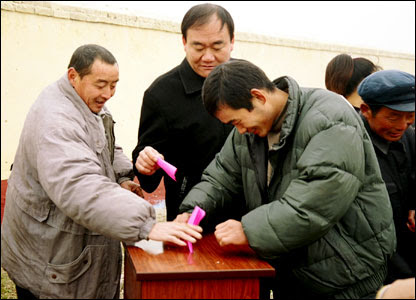 In many places, vote-buying is used to ensure electoral success.
Votes are extremely valuable, especially as the incumbent committee has power over the sale of village land.

Corrupt officials have also been known to sell off land and flee with the money, leaving villagers with no source of income. 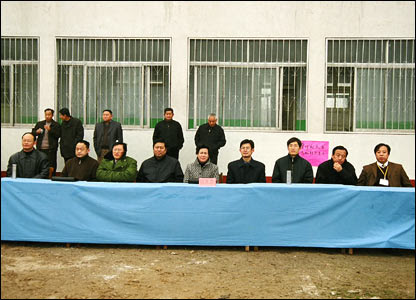 The election is overseen by a panel of Party officials from outside the village.
Their role is to ensure that everything is done in accordance with the law.

In some places, however, local officials have annulled election results after the "wrong" person got in. 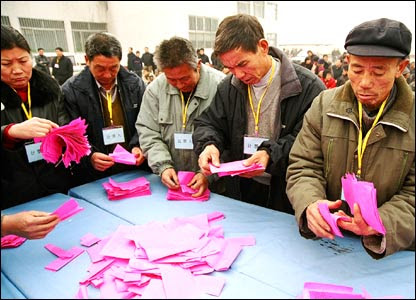 The ballot box is emptied and election officials start to sort the votes.
For 19-year-old Liu Kuan the result is :"Absolutely important, because we want to elect a good secretary - a good villager - from the bottom of our hearts."

Elderly villager Huang Maoying, on the other hand, says: "They're all the same. Whoever we elect, we'll have to follow. If they'd only give us enough to eat, and look after the old people, that'd be fine." 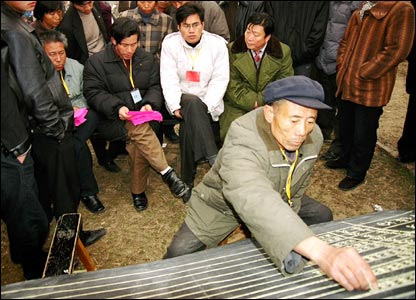 While one official calls out the names of the candidates from the ballot papers, another keeps a tally of votes per candidate.
It's known as "singing the votes", a literal translation, because "sing" can also mean "call out". 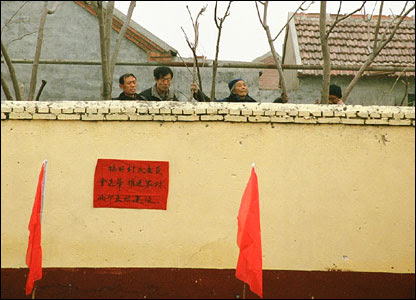 Villagers eager for the result peer over the wall of the school playground where the election is being held.
Their wait is almost over. 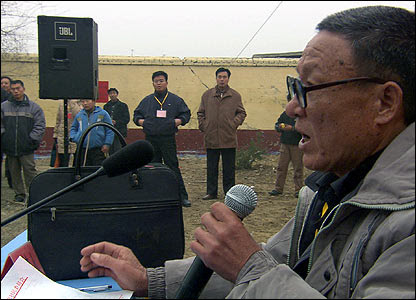 The master of ceremonies announces the election results.
Four of the six candidates were voted in, including the non-Party member.

The head of the committee, Zheng Jifu, retained his seat for another term, though with a reduced majority. 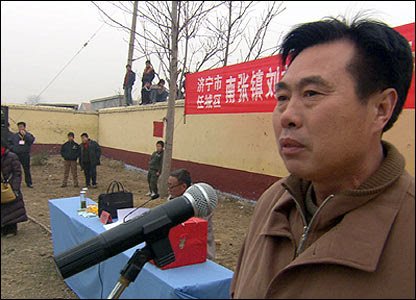 In his victory speech, Zheng Jifu promises to deal properly with all the village issues and to be open to "public supervision".
Some Party leaders hope that making officials more accountable to the public will help curb the rampant corruption which is making the Party increasingly unpopular.

Although more powerful officials are still not directly elected, Zheng Jifu knows that in three years' time, his position will once again be in the hands of the villagers. 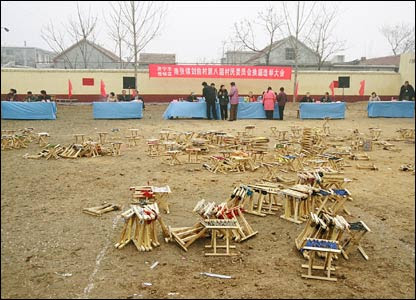 Hometime
Only time will tell whether elections like these will take place at higher levels in China, and if so, whether this will begin to restrict the Party's power.
Categories:
Posted by Sun Bin at 6/15/2006 07:02:00 AM

Here's a IMHO balanced report on pros and cons of China's expanded election:

SB, here's a link for you to check out:

It has some stats on the NPC:

i thought it is 'who can nominate the candidate' that differs these village (and district) election from the puppet elections of NPC? (so i wouldn't call them 'independent')

Correct me if I'm wrong, but isn't NPC deputies nominated and elected by district people's congress deputies? Whom are now directly elected?

BTW, I have a little bit of rant. Richard at PKD banned me again, for posting this article from Stanford Univ.:

"The Growth of Freedoms in China"

see this.
由选民直接选举的人民代表大会代表候选人，由各选区选民和各政党、各人民团体提名推荐。选举委员会汇总后，在选举日的十五日以前公布，并由各该选区的选民小组反复酝酿、讨论、协商，根据较多数选民的意见，确定正式代表候选人名单，并在选举日的五日以前公布。县级以上的地方各级人民代表大会在选举上一级人民代表大会代表时，提名、酝酿代表候选人的时间不得少于两天。各该级人民代表大会主席团将依法提出的代表候选人名单印发全体代表，由全体代表酝酿、讨论。如果所提候选人的人数符合本法第三十条规定的差额比例，直接进行投票选举。如果所提候选人的人数超过本法第三十条规定的最高差额比例，进行预选，根据预选时得票多少的顺序，按照本级人民代表大会的选举办法根据本法确定的具体差额比例，确定正式代表候选人名单，进行投票选举。
I am not quite sure what would happen during the "由各该选区的选民小组反复酝酿、讨论、协商，根据较多数选民的意见，确定正式代表候选人名单" process. basically too arbitrary and who are those people in "选民小组"?
besides, not all NPC reps are elected this way, are they?

---
I would suggest anyone with a sane mind stay away from the duck pond. :)
It is officially a hate site. most, if not all, posts and comments there are reflxibly anti-chinese.
The foul-mouthed russian could f*** everybody while others are banned asap.
i thought the only few people who made some sense were a couple ladies, but they were talkng to stone walls.

Anyone trying to comment there has only himself to blame. :)
I had stayed away from there for quite some time, so I do not know if anything changed.

If you guys want a place for meaningful chat why not go to Simonworld's forum, or the little room I set up there

---
btw, i just saw that they have the same thing in the pond, but immediately reflex action from a few nuts.

but there are many positive message from that article.

1) such discussion is open, widely circulated, and not censored (hosted in sohu), implies the central govt realized these are the problems and is perhaps willing to improve the situations
2) trends of improvements, albeit small steps, can be widely seen in the various examples quoted in the article.

(Thanks SB, since Richard banned me again, I guess I should take a hint...)

As an example, didn't the Taishi "eye out of socket" civil rights guy a city level Ren Da rep. elected on an independent ticket?

From what I've read (and lots of guessing with simplified characters) higher level People's Congress deputies are "distilled" from lower level deputies who acts as electors.

Did Hu Jintao had to win local or provincial election like Tony Blair? It wouldn't be hard, since Hu/Blair have name recognition and can bring "pork/funding" to home town or province.

As to your other comment regarding the article's mentioning of ambiguity in primilinary nomination and primary process, I think it's actually quite reasonable. IMHO intention of sea vote (HaiShuan) and consultation of nominating groups is to make the election result more meaningfull, not necessarily party control.

In US wide nomination also goes thru a "sausage making" process in order to yield a smaller candidate list. Otherwise the election result is less compelling and meaningful.

whatever the intention of the 'consultation' is, it is subjective and provides a pathway for manipulation.
as it turned out, in many cases it reflects control, of local authority in place, in not 'party'.

an this is bad, very bad.

there are many OBJECTIVE ways to shorten the list in the preliminary round, e.g. # nominators, guarantee deposit fund, etc. such process is widely tested elsewhere in the world. there is no excuse not using it.

I do not think the Democracy which American always talks about is a good thing.

The result of this so-called democracy would be the shift or U-turn of national strategy and policy in very short time frame. In the end, the country will not go anywhere.

The actual power will be controlled by those long-in-seat authorities such as military or intellegent services.

It may look good in developed country who has taken a lot of silver and gold from other countries and has a stable economy structure. But for others, this type of democracy means hell, we've seen a lot of those.

Yes, there is a correlation between income/development and success in implementing western style democracy.
But your argument will just go as well against any type of government in the developing world. it does not help us finding the right solution.

so, let's, instead of negating democracy, search for the path to get 'there'.

I think the People's Daily newspaper and China Daily newpaper is the mouthpiece of the chinese communist regime.

However mean your gold in wow life is,buy wow gold meet it and live it ;wow gold cheap do not shun it and call it hard names.It is not so bad as you are.It looks poorest when you are richest.The fault-finder will find faults in paradise.wow gold kaufen love your life,poor as it is.maple meso You may perhaps have some pleasant,thrilling,maplestory power leveling glorious hourss,even in a poor-house.The setting sun is reflected from the windows of the alms-house as brightly as from the rich man's abode;the snow melts before its door as early in the spring.sell wow gold I do not see but a quiet mind may live as contentedly there,cheap mesos and have as cheering thoughts,as in a palace.The town's poor seem to me often to live the most independent lives of any.May be they are simply great enough to billig wow gold receive without misgiving.Most think that they are above being supported by the town;powerlevel but it often happens that buy maplestory mesos they are not above supporting themselves by dishonest means.which should be more disreputable.Cultivate poverty like a garden herb,like sage.Do not trouble wow powerleveln yourself much to get new things,maple mesos whether clothes or friends,Turn the old,archlord power leveling return to them.Things do not change;we change.Sell your clothes and keep your thoughts.