Here are some first hand account from an American in Lhasa. (to be read in order, i.e., chronologically). It has been very peaceful on 13th when Kadfly arrived at Lhasa, while the demostrator and police were courteous. My hypothesis is that a few radicals among the protestors eventually became impatient and incited more aggressive actions, and that escalates. (One can also say this is the government tactic, i.e. to wait for them to get tired or impatient, which is the most convenient strategy and makes sense. Though it might well be just ignited by one push too strong by a police)

I would also recommend ignoring the comment field underneath, as it is no different from any other discussion forum full of "angry netizens" from both sides.

Our hearts go to those who suffered, Tibetan or Han.

In the government report "most" of the 10 victims are unarmed citizens (presumable Han/Muslim non-Tibetan).
新華社的報道說，事件中有10人死亡，數十名巿民及公安武警受傷

It seems that there us no way for the government to count the Tibetan casualties (if there is). If the government is confident that there is no excessive violence on its side, perhaps the best appraoch is to release the name list of casualties, and challenge Daramsalla to substantiate its claim of 30 or 80 casualties with real names and informations (the dead cannot be persecuted so there is no reason not to release names)

Related: Chinamatters discusses/speculates on what may have been going on. Very interesting read. 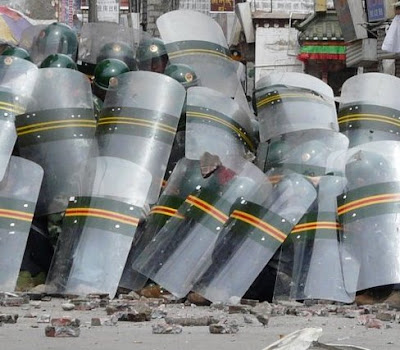 James Miles, journalist with The Economist, was in Lhasa during violent protests,says he witnessed violence against ethnic Han Chinese and Muslim Hui minority.

Ethnic Tibetans involved in protests were "armed and very intimidating," he says.

I think you would make a great addition to our site, polzoo.com. We are a user generated political editorial and social network. Check us out.