Perhaps we could build casinos

Tibet through the eyes of American Peter Kessler (1999).

1. The cadres' idealism
2. Education and the language problem
3. Perhaps we could build casinos

p.s. a message to the 'nationalists' (tibetan or han) remember we are the closest cousin linguistically (or implicitly, genetically), i.e. closer than with Mongolian, Korean, Vietnamese, Thai, Uighur, or even the native Taiwanese. So stop the fight or persecution, please.

See Linguistic map below from wiki 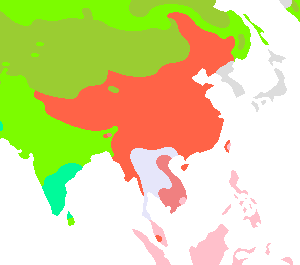 Sir, Wut. If you look up Wikipedia, there is a move to switch Tibetan into the Tibetan-Burmese language family; even within the Sino-Tibetan language family, Tibetan is supposed to be closer to Burmese and other "hey, those tribes aren't extinct yet?" languages.

yes, i am aware of that. a few points

1) it is a only 'move'/motion, so it only represents some views, which has not been widely accepted, yet
2) to say "switch to" is a bit imprecise. whether the 'move' will be accepted academically or not,
sino-tibetan is the "family", underneath it branches to sino and tibetan-burmese (which is a sub-family). then burmese and tibetan splits. (i have omitted burmese to simplify the message above).
3) the fact is: other languages, be it korean, japanese or vietnamese, mongolian/turks, belong to other families. and there is more similarity between sino and tibetan (include burmese) than between these 2(or3) with anyone else.