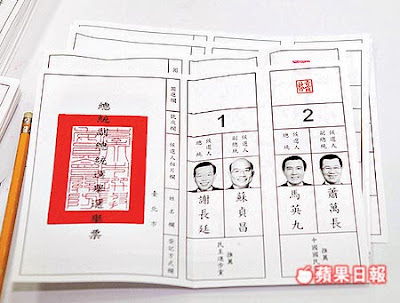 Q: How did KMT lose the previous election in 2004?

A: Because some of its supporters used their personal seals to chop vote!

The "Greatest Beaty" in the "Greater China" is not alone, an influential writer (MYJ had to answer her question about setting example for 6 year old in his winning speech on Saturday) implied she did the same, and probably four years ago as well. Our Greatest Beauty also told the press that a few of her friends also made the same mistake. Plus another actress Chang Ting, and some others, all pan-blue voters.

(UDN alleged our GB probably did the right thing 4 years ago, but he personal seal might have been a round one then -- she said she carries 3 seals with her)