See more in this blog. The blogger used these maps to show that Tibet was part of the Qing Empire (to counter claims that it was independent all the time before 1951).

IMHO all these history talks are trite. To us geographers (with better knowledge in history) we are more interested in these old maps themselves.

Meanwhile, here is a full collection on Harvard Yenching Publication on old China maps. There is a 1939 map published in Japan, where Manchukuo, Mongolia and Tuva were independent, while Tibet was labeled part of China. (Apparently Japan did not recognize USSR's annexation of Tuva) 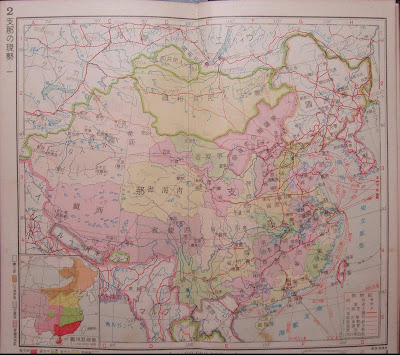 Your explanation is incorrect. Qing Empire was Manchu Empire with China as its part. Qing emperors were Buddhists, not communists. Their relations with Dalai Lamas were like "benefactor-guru"; Tibet was a dependent country but not a part of China. Migration of the Hans was limited but not promoted. Qing emperors kept traditional culture of the Tibetans and gave them full freedom in internal affairs.

what 'explanation' are you talking about?

take your propaganda and vent somewhere else.

Anon if you're gonna put up claims like that why don't you put up some evidence supporting it like Sun Bin did.

I am not trying to support or prove anything.
I am just interested in the maps.

Anon is correct.
Qing emperors needed the authority of Dalai Lama to have Mongolian nomads under his banner,hence managed control over vast majority of Han population.

Check any book on history of Tibet(Snellgrove,Tucci or Thurman) or Mongol,you'll find almost exactly what anon had written.

And the map simply says Tibet as Tibet.And judgeing from the word East Turkistan printed along with 新疆省,I wouldn't use this map as the proof of Chinese territorial sovereignty.


"Apparently Japan did not recognize USSR's annexation of Tuva"

The map says "People's Republic of Tuva" which was the official name at that point of 1939.Tuva was annexed to USSR in 1944.Japan was very interested in the annexation of Tannu Tuva along with independence of People's Republic of Mongolia and modelled the process of estblishing two puppet regime,Manchuquo and Mengjiang(as you see in the map,蒙彊連合委員会）

Proving something by showing a map is IMO usually a rather weak argument (look at post - WWII west german weather maps).

The 1939 map is interesting, notice how it places the Manchuguo/Mongolia border right at the Halh river.

Tuva became part of the Soviet Union only in 1944 (officially, anyway), so the mao is rather correct in this regard. What is a bit strange is the Tuva-Mongolian border: Huvsgul nuur is of course now in Mongolia (on the Map Tuva seems to stretch south-west enough to even include Murun), on the other hand the northern tip of Uvs nuur is now Tuvan territory, and the Tes river flows through Tuva for some 100 km. Btw. the colouring for Inner Mongolia is nott without interest, either.

huh, someone beat me to it.

I have no idea how the hell Hucsgul nuur came to become the possesion of Tuva,However the northern tip of Uvs Nuur has become Soviet Tuvan territory officially in 1958( by the initiative of outcasted top Soviet diplomat and at the time ambassador to Ulaambaatar, V.M Molotov)
So in a way it is accurate to some extent.

thanks for the insights on Tuva.

regarding the theory about Manchu leverage Tibetan lamaism to control mongolia and in turn leverGe mogolia to control han. i bet to differ. it may be one of the supllementary reason, but the main reason is simply Manchu Imperialism, isn't it?

again, as some of you pointed out. maps means history, and it does not really matter what we think and act in present days. it is lame for both C-C.P. to say 'inseparable' and just as lame for the "DL clique" to say it "never" was part of china.

i guess the mapper was refering to 'east turkistan' as a geographic name?

i had a second look at the map, and the legend on the lower left corner. it seems the mapper was drawing the 'current situation' of 'the chinese empire'.

it seems he consider even Tuva and Mongolia as part of "China", but just become 'independent' (under Soviet control in reality) for the time being. i speculate what the mapper has in mind is how to turn each region into japanese control step by step. hence, mongolia and tuva are also under the target/ambition of the japanese empire -- at the time.
this should send shiver over stalin's spine had he seen this map.

Well, Stalin certainly gave them a bloody nose in summer 1939.

Did the mapmaker consider Manchuguo to be part of China, too?

I don't really claim to know what the mapmaker has in mind.

but i suppose the logic is this (since he puts manchukuo together)
1) these are chinese territories
2) japan will annex chinese territories one by one
3) this is the current status
4) the difference between manchukuo, tuva, tibet, or fujian is a matter of time.

well, that is just some speculation which seems to be consistent with how the map was made.

Reffering of "East Turkistan",it is mentioning the polity,which is Republic of East Turkestan that was controling certain area of the region at the time.
(The geographic name would be 西域、which is the same term with the chinese)
The presence of 新疆省was name only in 1939,so naming East Turkistan along was pretty accurate perception of the status.

What the map maker probably had in his mind was respecting terrotorial claim by Republic of China,which has now become ally with Wang Jinwei at the top in Nanjing,not that "Chiang clique"retreating to Chongqing.

Japan needed to respect ROC's claim to deter Chinese hostility toward Weng for the colloboration.
That is why Ulaanbaatar had to wait until 1974 to have relation with Tokyo.

As far as I know,there were no plan to annex Chinese territory by Japanese empire.
Tokyo already has trouble integrating Koreans and annexing Manchuquo would change demographic balance of the empire drastically,thus Japan was interested in the way Soviet had dealt with Mongolia and Tuva,making them as independent buffer states while institutionalize influence within state strucuture and make them dependent.

Japan was happy to establish a puppet regime in Nanjing that would assure Japan's status in Manchuquo.Tibet was completely out of their focus.