Just came back from Lhasa. It was a sight-seeing trip I had planned for many years but I was never able to get to it - due to issues related to travel permit, holiday constraint, plane schedule, hotel booking, etc. Now, everything is easy to book and i know I won't have to fight for the Potala ticket.

I will upload some more photos, plus sharing some anecdotes.


---
Note: personal bloggers are welcome to use these pictures, as long as you do not crop the picture (the pictures here are the original ones without cropping), do not distort through captioning, and provide a courtesy link/acknowledgement.
They should not be used by any organization (profit or non-profit) without seeking permission.
This is the first time I put up such note. But I do not want my pictures be distorted as Kadfly's shield formation picture was.

Yi Hion Fashion Store, where 5 girls were killed by arson during the riot. On Beijing Road East, about 1 km west of Ramoche Street. There are flowers on the doorsteps, to mourn the victims 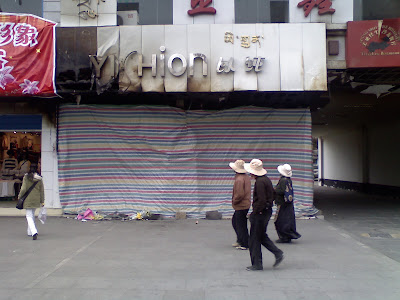 The South end of Ramoche Street, guarded - same location as Kadfly's PAP shield pictures, 3 weeks afterward, a new banner was put up in front of the old one. 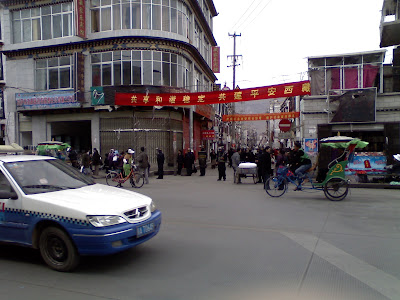 South of Beijing Road East, opposite to the Ramoche Street picture above, guarded - should be where Kadfly stood while he was taking the photo - the shops behind were burnt (perhaps a few hours after he left).
This alley leads to Bakhorn Street. I tried to enter. They checked my ID and turned me away. 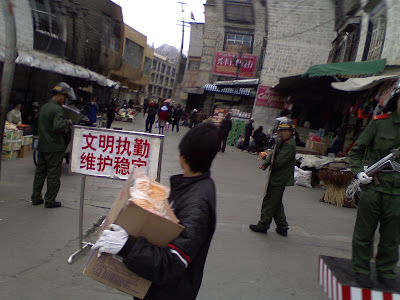 Bakhorn Street, as empty as it could be 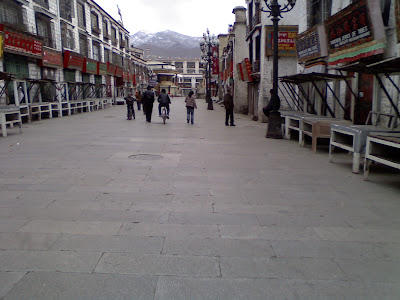 hello sun bin, how did you get in Lhasa? there are no restrictions on getting into Tibet? are restrictions for foreigners only? how come no western journalist go there? couldn't they go there and look for proof of the CTA claims of the killed tibetans, check if their list is true or fake, as peoplesdaily claims.
i'd love further posts about your trip

i just flew in. there are daily flights from chengdu, chongqing, kunming and beijing (stop at CD/CQ), perhaps other cities as well I believe.

Foreigners need to apply for entry permit. And it is likely that they are not issuing new permit until May 1st. (Official announcement has May 1 as re-opening day) Local tourism industry is already complaining.

PRC nationals and those from HK and Macau are exempted. I used my HK ID to check in the flights and even get into those alleys. I usually need to explain to the PAP i am from HK as my ID looks different from the PRC and Tibetan ID (it appears that Tibetan has an additional ID for minority benefits such as getting into Potala at some 10 yuan).

(people with Taiwan ID also need to apply for permit)

As far as I experienced and heard (which is a tiny sample size) it is not different from pre-314. Just a lot more PAP on the street intersections. Local people warned me to stay at hotel after dark, but i did not take heed.

I watched CCTV-9 at the hotel (among all those BS propaganda such as hosting a discussion with Han Chinese scholars discussing the history of Tibet and the serf system -- they are telling the truth most of the time but how can you be credible if it is all official voice), there is one program where the reporter interviewed a few hawkers telling us business is as usual. The interviewees (a Han and a Tibetan) looked so stiff that I wouldn't have believed them. But the situation was much better than what that CCTV program conveyed.

i think all journalist need permits. (even those from HK).

i agree with you that the government should just let independent reporter to verify the casualty name list (and publish its own list). but i think the government does not has such courage or "self-confidence"

1) yes, restriction (permit) for foreigners only. but i heard of foreigners can ask a chinese to buy a ticket and board the train (air traffic needs ID check thanks to terrorists and this trick does not work).

2) once you arrived you are free to move. except going into border counties where you would need border permits. it cost some 30Yuan to get them in Lhasa but much more if you do it at the small counties (corruption/bureaucracy), i heard.

(This is "Confucius" from Lonely Planet Thorn Tree and VirtualTourist.com)

First of all I sincerely applaud you for this wonderful contribution to global understanding of the current situation in Lhasa and Tibet.

I would like to ask if you were allowed to take photographs from the roof of the Potala, since it sounds like you were free to roam without supervision.

Also, you mentioned that border county permits were on sale in Lhasa for around 30-40 yuan. Do you recall if this by chance includes Yadong county, which borders India and Bhutan?

I look forward to visiting Tibet with my Hong Kong ID card next month!

My advice, go there before May 1st, before it was crowded by other tourists (full opening). Perhaps you could enter Johkang a couple days before May 1, or at least arrive on Apr 30 to avoid the crowded on May 1st morning.

Photo atop Potala (and those on PAP), they are not allowed. I had to do it secretly.

i am not sure if border permits are on sale. i think you can apply and you need to pay some due. and local travel agents/etc could do it for you. so get the arrangement (and negotiation) done well before you arrive.