The myth of the "Earthquake Line" in China

There is an article widely cross-posted around the internet about a 'mysterious earthquake line' running from the estuary of Tumen River to the SW of Yunnan bordering Myanmar. Alleged this line connects The 1975 Haicheng quake, 1976 Tangshan quake, 1966 Xintai quake, 1695 Linfen Quake and even this year's Yinxiu quake on May 12th. (Further claim by "readers" even includes those 1000 years: 1037 Kaifeng, 1303 Zhaocheng, 1555 Weizhou, 1654 Xian and others)
Here is the "earthquake line" 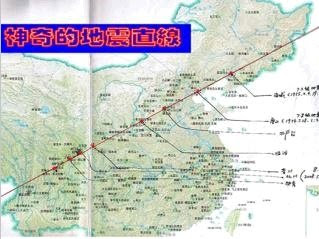 Pretty inpressive, it seems. I happen to have scanned a "full" (recorded) earthquake map for China back in May. and also an "earthquake belt map" in the same post. Amazed by this map, I dig it out and draw a line and this is what I get. 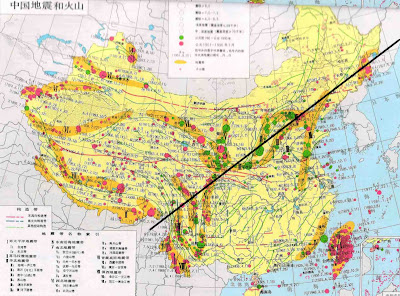 The red dots are quakes since 1900 (size represents strength) and green dots are major quakes recorded in history. I am not sure if I would call this a correlation line. Yes, a line passing half a dozen major quakes, ok, but there are many dozens of such quakes and I can draw a hundred of these lines from this map.
Earthquakes do form patterns, as they are correlated with plate techtonics and fault lines, as indicated in, e.g., this chart, or this. If there really is a line, it would be the one running NS from Yinchuan to Kunming, which is, in fact 2 fault lines approxinately lined up by coincidence.
This charts show how one can create false correlation by selectively removing the data points. This is exactly what those earthquake predictors have done, selecting the a few data points from the hundreds such that they fit the "proposed" formula.
Posted by Sun Bin at 11/28/2008 04:28:00 PM

Hi, I'm looking for some information on the Three Gorges Dam and its proximity to fault lines. I do read some Chinese/Japanese characters, but I'm having trouble locating Sandouping, Hubei on the large map you drew the line on. Are you able to point me in the right direction?

hubei is quite far from that line.
sandouping in yichang city will be around the "kink" in yangtze river, above the number 14 of "1631.8.14", NW of Changsha/Dongting Lake, and a few hundred km west of Wuhan. maybe a 1000 km SE of the that line.

This is similar to claims about Laylines in England connecting historical sites. Draw any straight line on a map and it will bisect half a dozen points without any real connection.

The disproof is simply that these are lines on a map. Note map! The world is not shaped like a map. Maps are mathematical projections of the curved earth. Any straight line on a map is a curved line on earth. Why should any set of points happen to match up with the choice of projections you used to make your map.

As to why the OP couldn't match up the points: His map is not the same kind of projection as the original map. You can see that your map has more stretch north-south than the original. This will bend the line and thus change the match of the points.