This is pre-meditated terrorism, 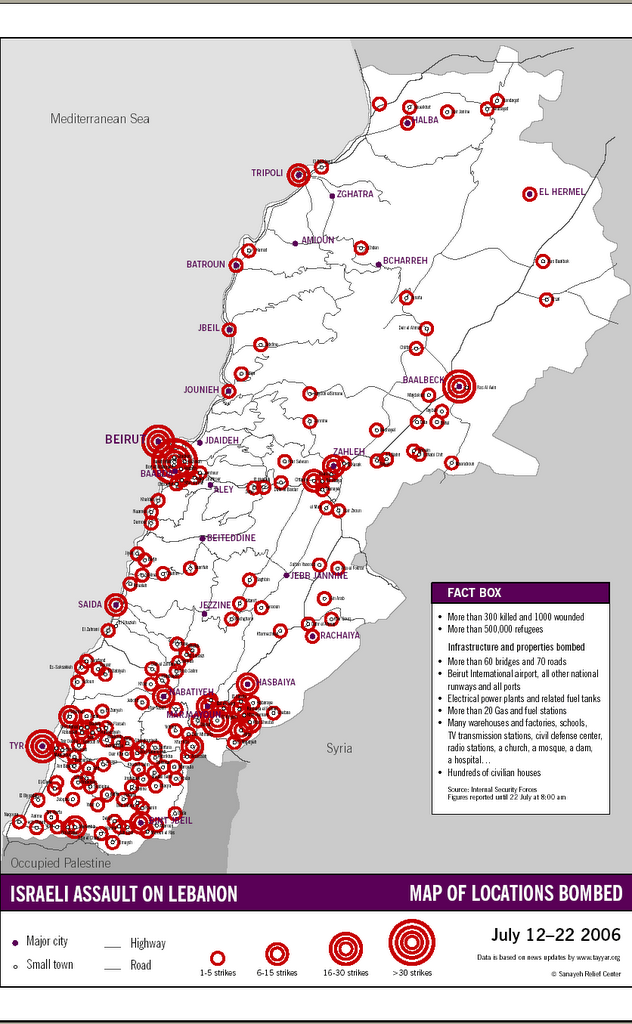 designed to shock and awe the new democracy in Lebanon, as Israeli Foreign Minister Tzipi Livni confessed to Newsweek
Yes, that is right. It is not to attack Hezbollah. It is a "message" (see the map and you know why it is a "message"). If this is not clear let's hear what Israel Colonel Gal Luft said,
I can only conclude that the 6 hour bombing on a UN Post ignoring UN identification (which resulted in 4 deaths) is a message to the UN is that "Lebanon is a burden".

Regarding democracy, Livni seems to believe any democractically elected government needs to seek her godly approval
Where is Dubya Bush standing at this moment? Remember "You are either with us, or you are with the terrorist"... but you are not a terrorist if you kill the Lebanese, the Chinese, the UN, the Russian, the Cuban, the Panaman, or any civilian who does not hold a US or Israeli passport.

P.S. I have great respect for the Israeli people. I just do not think it has the right strategy to achieve its goals in this event, as I commented before. -- will elaborate about my reasoning later.

hmm....it does not distinguish civilian vs military, nor does it distinguish hezbollah vs innocent lebanese civilian. the wiki classification provides more breakdown, including injured.

hezbollah could provide the excuse of lacking precision weapon and wanting a ceasefire (and their initial attack did not target civilian). what is israel's?
i can sympathize with israelis, then what is Condi/Bush's? I only wished they are hypocrits at thsi moment, at least pretend you are treating both sides fairly.

To say that you don't understand anything of the situation is to be kind...

harry,
thank you for being kind, and for not bombing me back to stone age.

The Israelis, the Neo Cons and the right wing Messianic Christians in the US are the anti Christ or the beast mentioned in the Bible.

To be blind in politics is a bad thing, to be blind in ME politics is a worse thing, to be blind in Israel history is really unexcusable. I imagine that the fact that Israel's enemies are trying again to annihilate it doesn't mean anything for you. Clearly Israel democracy doesn't deserve your consideration, only deserves to be called "terrorist" by the same people who always are in the first place when a defense of chinese dictatorial regime is needed. The world upside down.

harry, your insult and ignorance aside, i respect israeli democracy and lebanese democracy equally, perhaps israeli people more, because of their great contribution to human knowledge and civilization.
but that is not the point. the point is, there are a thousand solution that do not require taking so many innocent lives. e.g., israel could have achieve its security aim by taking, say 20km of DMZ, and then ask UN patrol to take over.
moreover, what israel did this time does not help its security at all. on the contrary, it is going to provoke more confrontation and more innocent israeli civilian casulaty in the future. it is also going to alienate the lebanese (who would otherwise be sympathetic with israel) to side with hezbollah.

to kill innocent citizen indicriminately is terrorism, whether it is executed by a state or a non-state entity such as al qaeda.

No, to kill DELIBERATELY innocent citizens to PROVOKE TERROR is terrorism. To react against terrorists after being attacked is self-defense.
If you want to condemn terrorism, look at Hezbollah and Iran, not at Israel.

P.S. If Israel should have depended on UN for its survival, today we would't talk about Israel anymore.

Insult and ignorance aside.

1) ambush and kidnapping soldier is not terrorism by your definition

2) bombing residential building on purpose is terrorism by your definition, esp bombing civilian in a hope to provoke local people to drive out your enemy, is terrorism.

3) it was UN resolution that created israel, remember? in 1948. israel was the pioneer in terrorism itself, remember king david hotel 1946? what were your people reacting to?
it may not be fair digging out things happened 60 years ago, but you need to condemn these jobs before talking about anti-terrorism yourself.
-- so do not accuse me of ignorance in middle east history. educate yourself about king david hotel first. btw, where did you learn your history lessons?

4) i said "clear 20 km yourself". then ask for UN. i did not say, "ask UN to clear the 20 km demilitarized zone". so your UN comment is totally irrelevant.

Ok, Sun Bin. You've convinced me.
Death to Zionist Entity! Long live to Hezbollah's heroes!
Thank you for explaining that Israel was and is the main source of Middle East terror. I didn't realize it until now.

My God... what a wonderful world.

Sun Bin,
Don't waste your time. This person is another member of the "You are either with us or against us"
school of thought.

just a final comment.
1) this post has nothing to do with zionism. but when the world (other that its sponsor US) switched its sympathy from israel (in 1945-1960) to its neighbors. i think it needs to reflect what have been done wrong all these years.
2) aside from this post, an unrelated note: IMO zionism is bad nationalism, even though my high respect for jewish people tells me that they have deserve a piece of land for themselves, whether it is Uganda/Kenya, Russia Far East, Kroninberg/Kaliningrad, or Plaestine, on the condition that it does not encroach on the right of other people, or kill innocent lives. the kind of zionism harry believes in is not too different from nazism. but i am sure einstein will disagree with this harry.

as advised, this harry will be ignored from now on.