MSM biase in the West - and the cnn refutal

I am just pasting the "p.s." from my previous two posts.

For Taiwan, the notorious Bradsher from NYT tried to connect his judgment on riot in Lhasa and the Taiwan election, while the same NYT and other MSM coincidentally omitted the important text accompanying a picture from KAdfly's orginial post (and this picture that was taken a few minutes later). 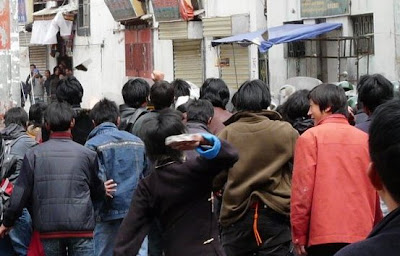 The photo above is my homage to cnn, the full picture is the one below (source: Kadfly. The nyt/cnn cropper wouldn't tell you that. He wouldn't even select this picture.). In this picture one can see clearly the plastic shield, and also the watching crowd behind the line of shield. The crowds (both side of the shield brokade) looks relaxed and joyful at that point of time. 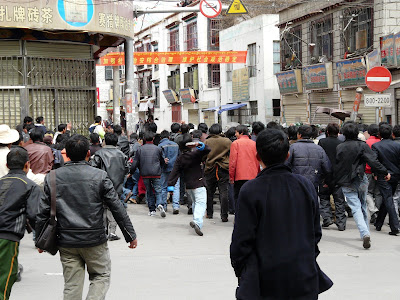 -----
Update on the CNN bullshit
"The CNN spokesperson said that in order to fit the page layout, that controversial photo had to be made smaller. This it was impossible to keep both the demonstrators and the burning vehicle in the photo. "

The CNN spokesperson lied shamelessly. If you examine the screenshot below (source: anti-cnn.com ) you will see that cnn has

(1) chosen to keep the white car (which is arguably peripheral in terms of news value), and

(2) cut down the height to retain the aspect ratio. Yes, CNN cropped the picture but then had to also crop the top to fit the aspect ratio, while it could have simple shrinked the whole picture as the more or less same ratio!

(4) Is cnn saying the 2 people in the front are 'demonstrators', while that dozen to the right aren't? (I had always thought that "a bigger crowd of", is always more powerful than "a couple of", demonstrators) 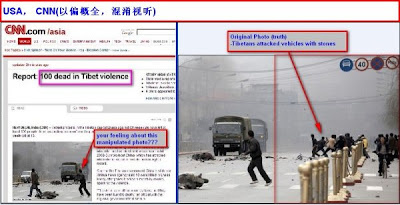 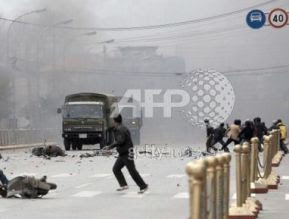 and here is the infamous cnn picture 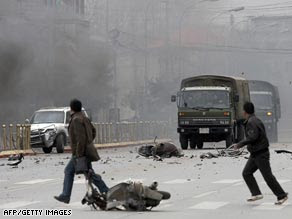 Now what about the white car? I do not have the original photo, so I tried to merge the two photos I was able to locate and see if it could fit on a 4:3 screen. Yes, it could, with every single object in that cnn picture included. The mob was not that far away from that army truck. I suppose cnn needs to come up with another excuse?

- At this point, I need to admit that I do not know who cropped the 4 photos in getty's website. AFP, Getty or CNN (i.e. CNN archived the cropped picture in such case). But the fact that cnn admitted that it did the cropping job seems to suggest that it did obtain the whole picture from Getty/AFP and hence could not blame AFP for this. 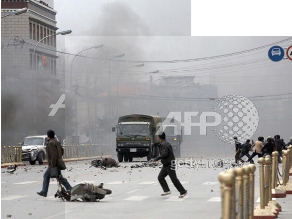 When cnn referred to a "burning car", I believe it was referring to this picutre, where is another burning car to the left of the white car. But that was not the picture CNN chose/cropped. Perhaps the cnn person was really confused when he made up that lie，but my speculation is that cnn was looking for an excuse, but used this photo instead of the one it has actually used (with only the white car). 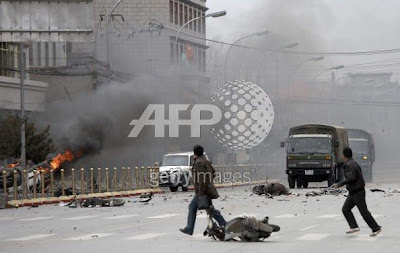 Lie cannot be covered by another new lie. While cnn could have just admitted to being insensitive and being lazy in picking one random pictures from the several crops AFP/Getty provided (such mistakes are minor and excusable), it chose to deny and degenerated itself into the same class as the propaganda machine of the C-C.P. One has to, again, admire the German way. The German media can now proudly denounce both cnn and the PRC media.

Bias over Tibet cuts both ways

Some Retreat, Others Push Forward

I also did a presentation about this last Thursday. Unfortunately, it's hard to make western people understand the real situation.

What a shame the west media, especially the CNN :(

the distorted pictures are like a pre-emptive first strike in the war of disinformation against China.
Attack and bomb without warning, like the Belgrade embassy. Then offer some lame excuses and insincere apologies.
But...damage done. Impression formed in the mind that China is ruthless aggressor.
Such pics strengthen the position not to allow foreign journalists into restive areas.
Journos and pixmen may give the facts and pics as they are. But copy editors twist and mould them to suit other purposes.

Compared to the Indian media's reporting on Tibet issues, the CNN would be like an innocent angel. Take a look: