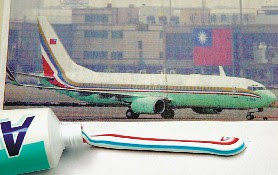 There are signs that Taiwan's Chen Shui-bian is planning for another surprise detour next week. He has surpised us before.

Here is the flight plan and mileage for his trip
What is intriguing is his obsessiveness on using "Air-force 1" (Commonly mocked as "Aquafresh-1" 牙膏一號 see picture above). Even after US government officially rejected AF1's request to land on Guam (AF1 is painted with ROC flag but CI plane has a "neutral" plum blossum logo), he still wanted to use it on the first leg of his trip, which only represents about 20% of his total mileage. He and his aides then devised an elaborate flight plan (see map) to

The total cost for this elaborate arrangement will be over NT$27M (i.e. US$0.9M), vs about NTD 7-8M had he used the simple plan of
Chen Shui Bian has been using AF-1 in his domestic trips extensively. So this is no new gadget to him. It is really puzzling that he would prefer to spend 200% (US$0.6M) more just to enjoy the AF-1 for 20% of his trip. It makes no economic sense. It does not help his falling approval rating at all.

As a result, various conspiracy theories emerged. Among them Chen was alleged of planning his exile with this trip (AF-1 can carry his secret assets). Given Chen's character of "never give up" and obsesssion for power, I strongly doubt such theory.

Discarding the exile theory, the current plan is a very strange one, both economically and politically. More plausible explanations include
Either this, i.e., some major surprise on Sep 3rd, or we can only conclude that Chen Shuibain has lost his mind, because the waste of US$0.6M (NT$18M) equals 1/3-1/2 the amount of the scandulous "State Affair Budget" claimed with fictitious receipts. The average "air-ticket" cost for the 150 people is about $6k/passenger, enough for a First Class rounder trip retail ticket for TPE-NYC.

I believe it is the former. We shall to find out in a few days.

So far, no surprise detour, albeit a sealion shaped detour. Perhaps it really has to do with the cargo?

Now Chen told his story, the reason he insisted to spend US0.6M in extra was because he did not want to disappoint the AF-1 crew!

You don’t think Ma will travel anywhere when he is president? You don’t think that will cost taxpayers a lot of money? You think he will pay out of his own pockets?

When Ma becomes president, and is busy flying back and forth to Beijing to coordinate policy with his patrons in the politburo, do you think Apple Daily and the other pro-KMT papers will print diagrams like this and scrutinize every detail, and come up with accusations against him?

Of course not. They will still be too preoccupied with Chen and his family to be able to act as a genuinely objective news source. Those papers are worthless.

I don;t know if you missed or overlooked the point here.

the issue here is not about travelling. Chen can travel as he wants, and he should travel on AF-1 if he should. But one shall not fly 3 planes when one is enough.

If Ma (or even Bush/Blair/Koizumi) is going to take an extra empty plane in his journey, I am sure the media (incl AD) will be outraged.

given the unnecessity of the event, one suspect there must be something else in plan, which requires the commissioning of the extra airplane.

Either this, i.e., some major surprise on Sep 3rd, or we can only conclude that Chen Shuibain has lost his mind,

Actually, the only obsession here is the one of China apologists with A-bian. It would be hard to come up with a figure they obsess about more often than him.