Tens of thousands of Taiwanese protesters took to Taipei's streets in a bid to step up the pressure on embattled President Chen Shui-bian to resign over alleged corruption. They marched a 5.5-kilometer route circling Chen's office and nearby residence amid downpours caused by an approaching typhoon.

I love the melody of this song "圍城之歌 Song of Siege"

Yes, this is democracy and freedom of expression. Whether KTGL will become EDSA III, this is a good lesson for those in power on the other side of the Strait.

So here are the beautiful citizens in the island of Taiwan.

Singer/actress Vivian Hsu wore red in a separate occasion, allegedly showing her support for the protest. 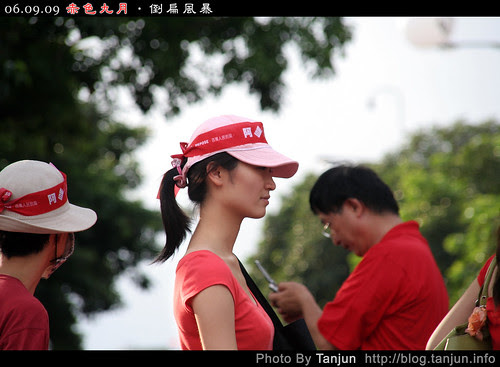 ---
Update: See ESWN's great analysis on the lesson of popular movement in Taiwan this week. I have been skeptical of Shih Mingteh's and the whole campaign, and avoided to reach conclusion or side with either camp. But this is such a brilliant executed campaign, and the 360-1000k people just cannot be wrong. I mean, how can 1M people in an urban area of less than 2.6M (+4M if including Keelung, Taipei County) be "anti-democratic"?
As HK political analyst said, "Democracy is not about party politics, it is about the power of people. If HK people can depose Tung Chee-hua by showing our foot-voting, it is democracy for HK."
Categories:
Posted by Sun Bin at 9/16/2006 10:08:00 AM

Once there is larger scale violence, in stark contrast with the peaceful protests the previous night, Ah Bian will be over.

You're comical, Sun. "More radical and fundamentalist"...meanwhile, at the head of the pro-Blue protest was James Soong, recipient of a $400 million kickback and defender of violence against democracy activists in the 80s, and Ma Ying-jeou, student spy, and of course, the Bamboo Union gangs and all the other taipei gangs. And hwo about that Lin Cheng-chien, beating up a democracy supporter on a TV talk show, in business with Chang An-lo, one of the island's most notorious gangsters.

In any case, gangs dressing in green and attacking reporters is par for the course for the KMT, and old trick that dates back almost three decades.

"more radical." Bwahahahaha. The radicals are people, so many still revered, who murdered tens of thousands of locals in their quest to retain power, and have shut down governance on Taiwan merely because they can't stand the thought of an ethnic Taiwanese president. It's the authoritarians who are radicals, Sun.

1) show me evidence that Ma was a student spy, and your other allegations, etc.

2) i have zero respect for soong. but let's face it, following CSB's logic, until you are sentenced, you are not guilty.

3) ethnic taiwan? you mean he is the austro/polynesian aborigine? hmm, i didn't know that. maybe they should pass a bumiputra law like malaysia did.

Of course these demonstrators are more radical and fundamentalist than the usual pro-Green supporter. They are a lot more enthusiatic because they travelled 300km north to do this.

There are, of course, also radical and fundamemtalist Blue (also radical Green like Shih) among the anti-corruption demonstators, perhaps some 60k of them. This is my reasoning. The blue:green supporter ratio in taiwan is about 50:50 in taiwan (2004 vote), perahps 60:40 now due to the disappointment in CSB. Usually those who take to the street are at the end of each spectrum. So when you see demonstration turn-out of 6:1, you know Green got its 1st to 5th percentile, and Shit got the 1st-30th percentile, which group is more radical on average?

This is a "video of the "gangs dressing in green and attacking reporters". Watch for yourself and tell me if the legislator Wang Shi-jian (as a mediator) is KMT and if this is KMT stages.

Wow! That's almost as bad as that stuff at the airport when young gang members with actual weapons beat up old people (for "being Taiwanese in Taiwan") and left them in pools of blood!

Or this, where a female pan-green supporter uses her face (to the point of unconsciousness -- of all the nerve!) in an unsuccessful attempt to damage the (paci-)fist of a kind-hearted red-shirted hyphen-ated anti-Chen employee. [/sarcasm]

Violence is not good from either side, but Sun Bin and his ilk need to get some perspective. Read a little bit about pan-blue violence here.

Barely a parody-phrase of the pan-blues: "Watch out! Those green-shirts might defend themselves! We'd better beat them up first!"

Whatever your agenda is. My response above was to MT's statement (or insinuation?) that KMT sent out "gangs dressed in green and attacking reporters". You are welcome to provide evidence.

Tiny Tim, and MR Turtle, please get the hell out of Taiwan, crawl back in your hole.
From a NATIVE TAIWANESE.